Tomorrow's the end of the week for me.  That makes more sense since specifying days doesn't really, what with working in retail.  Business is slowing down.  A Specialist I work with suggested that maybe people are starting to run out of money.  We have one of the largest Navy supply bases on the East Coast (essential), we are the state capital (essential), we have the University of Pittsburgh medical, Geisinger, and Penn State Medical Colleges (all essential), so lockdown here, except for the whining Republicans, was not bad.  Now, however, financial incentives companies were divvying out to their associates are beginning to dry up, unemployment is stuck in the 'red zone,' and store shelves are filled with non-essential items to hide their holes.  Money is getting tighter.  In my store, our foot traffic is slowing down.  Don't get me wrong, sales are still great, but cracks are starting to show.  Blame the Republicans who want to tell you how to live, but have no clue how to run the country.

I saw where Michele Bachmann was running her mouth again.  She exemplifies the biggest problem with Conservatives, their need to shriek their narrow minded beliefs over the sane voice of reality.  While I agree with going high while "they go low," sometimes we need to tell losers like Bachmann to just shut the hell up.  Remember when she shrilly shouted how war was being declared on Christianity?  That was a lie.  Evangelicals were declaring war on everything they couldn't control.  We need to begin calling these people and their lies out.  We need to just tell them in a very forceful voice to "shut the hell up."

Nineteen years ago 9/11 united the country and almost immediately afterwards the Republicans starting dividing it with lies about 'weapons of mass destruction.'  This election, we need to teach them a lesson.

And don't you think it's funny that the Idiot Jerk, who likes to claim he's a brilliant businessman, has a campaign with financial difficulties.  Evidently they're cutting back on TV advertising in order to have a workable cash flow during the last 30 days of the campaign.  I don't know about you, but this is a terrible reference to put on a resume if you want to be re-elected.  Don't doubt for a second that he and his party will renege on their debts, especially when he loses.  I can already hear his attorney's saying "why should we pay you, you didn't help us win?"

And, finally, my zinnias are still blooming.  Here's a snap. 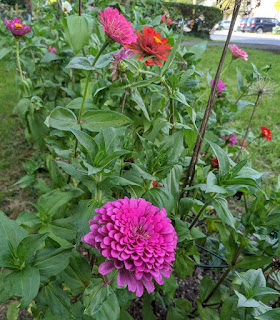