Yesterday was drizzly, with rain on and off, and very warmly humid.  I had turned the A / C off since the previous day temps had been fine...  And, of course, I forgot to turn it back on yesterday morning before I left for work, so when I got home it was steam room city in my house.  More rain is forecast for today, with  possibly a thunderstorm this evening.  California's supposed to get record breaking heat again this weekend... and like all weather patterns it will move east. Yippee!

Things seem to be slowing down at work.  That is normal for this time of year.  People become less active as the cooler temps of fall arrive.  Well, at least they're supposed to start arriving.  We are running a $5 pain rebate which means now's a good time to buy my hall paint.  The colors are slowly being narrowed down.  And some picture frames arrived 2 days ago.  I'm framing the original artwork for my book covers to display in my newly painted hallway.

As for the possibility of the Idiot Jerk in the White House having Mini-Strokes?  Well, he has always been socially dysfunctional to a degree.  He has been manipulating the media for years, even his reality show was designed around his ability to skirt the edges of reason.  He has been pushing the boundaries of his own lunacy in order to get the attention he craves.  His success has always hinged upon his ability to spit out extravagantly outrageous criticisms. What we are seeing is his braggadocio becoming more outlandish.  My Mom had dementia and she would sometimes make things up as her mind slowly seeped into her own reality.  The Idiot Jerk?  There may be a hint of early stage dementia, but mostly he lies on purpose.  More and more, he's relying on the freakish nature of those lies as he desperately grasps for a means to get himself re-elected.  For him, to get fired, will be a mind crushing humiliation.  Come on people, let's humiliated the Hell out of him.

This being said, I don't find it surprising he's encouraging the residents of North Carolina to break the law by trying to vote twice.  This is not dementia, this is dirty desperation.  He will continue to be more absurd, which hurts him.  There is no rationality in his campaign.  He is throwing as much shit as possible.  Well, let him throw it.  All of that shit only makes him weaker and more vulnerable.

For those interested, below are 4 of the colors I've chosen to eliminate for the hallway. 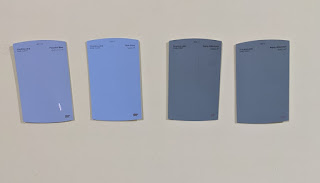