A Fool for Generalities

Well, I get to go back to work today... and I'm not excited.  Unfortunately, I like the money too much.  And it's not as though my job were difficult.  I'm suspecting will continue to slow down.  I haven't checked yet, but I do believe last week ended the Covid bonus we've been earning.  They sweetened our checks since the hours were cut - we're almost back to normal hours so that sugar's no longer necessary.

I'm going to be switching out my workout computers.  I've been using an inexpensive Dell I purchased 3 years ago because I wanted a Touch Screen.  Bad Decision. It's going to now be used for notes.  Interestingly enough, I'm going back to an even older Samsung that works well.  The only reason I switched to the Dell was because I was seduced by the idea of a... Touch Screen.  Lesson learned.  Yesterday I started copying over my files.  Easy Peasy.

Breakfast with my brother went well.  When he brought up Kamala Harris, and Jacob Blake, and the charge filed against him by his girlfriend I sensed desperation.   He asked if I didn't think she was being hypocritical by defending him in regard to the Me Too movement.  Like may social conservatives, he is grasping for straws.  They're looking for a dead horse to kick.  Republicans do that very well.  They get a little glow in their heart as they continually stomp something into the ground.  They did that to Bill Clinton and he won a 2nd term.  They will never learn since that entails assessing and evaluating their tactics, and to even consider that means questioning whether they just might be wrong.  This has always been their Achilles tendon.

The Idiot Jerk did a Town Hall last evening, supposedly with undecided voters.  I didn't watch.  This morning I played clips with the sound turned down.  I was struck by his eyes, small and glassy.  His anger is revealed in them.  He was furious his lies were being questioned, furious he was being forced to explain himself.  I will admit to reading the subtitles.  I had to laugh when he was pressed to explain his saying that Covid will disappear.  He repeated that again... and again.  Well, of course it will disappear... eventually.  Hell, even the pyramids will disappear... eventually.  He is a man who lives for generalities since specifics prove him to be a fool.

And, as a palette cleanser, here's another of my dahlias.  Pretty, eh? 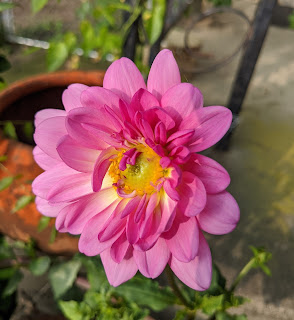