Today's my Friday! (For those of you who can't hear the excitement in my voice).

According to Accuweather, rain showers are in the forecast, tomorrow, too.  I can deal with that.  This past summer was dry... and hot.  Growing up I can remember the temps being warm, anything in the upper 90's (F) was called a heat wave.  Temps in the mid 90's were common this year and low 80's were almost considered cool.  Climate change, you know?

Of course, everybody is talking about the Idiot Jerk's taxes.  What about that $70,000 deduction for haircuts.  Yep, that's right, supposedly he paid $70,000 during one season of his reality show for someone to wrangle that rat on his head.  That's right.  $70,000 for this: 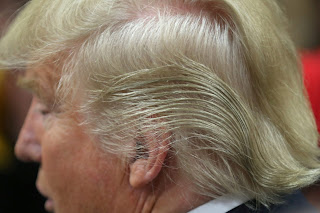 I wonder if that figure includes the tip?  Probably not.  I don't see him being a big tipper unless he's trying to impress someone.  More likely, he's one of those people who says, "I'll get the check, you get the tip," and then adds the check to his expense report.  Now we know why he's approaching his lost bid for re-election with such frenzy.  His bill is coming due and the United States is not going to be there to pick up the tip.

The debates are this evening.  The Idiot Jerk's team is already beginning to tamper down expectations because... well, he's not really a fast thinker.  Occasionally words pop out of his mouth that are ridiculous as hell.  Supposedly he hasn't prepared, which makes perfect sense.  How can you prepare yourself when you do nothing but lie?  No matter what the question, he will do nothing but bear false witness, over, and over, and over again.  His taxes prove he is nothing but a fraud. an embarrassment to the rich and famous, whose ranks he desperately wants to join.