I do believe today is Wednesday.  I have not quite hit my hump day... that happens tomorrow.  I am looking forward to my approaching 3 day weekend.  Balancing that, however, is the fact that after that 3 days, I'm scheduled to work 6 days.  Bah.

I'm scheduled for an eye appointment for Monday.  I'm going to cancel.  Yeah, I know I pissed and moaned about the VA cancelling my previous 2 appointments, there is a 'however'... however.  You see, my Mom went to The Leading Edge eye clinic.  Twice I took her to appointments.  Neither time was I impressed.  My Mom liked the doctors, mostly I think because they catered to her.  They also convinced her to set herself up for the monthly purchase of an eye care supplement, something she was told would help with her Macular Degeneration... except my Mom didn't really have the serious Macular Degeneration which steals your sight.  She had old age.  Instead of just telling her this was part of the eye's aging process, they wanted her to spend some of her fixed income on a supplement.

AstraZeneca has put their vaccine program on hold... someone got sick.  Woah.  This is not what the Idiot Jerk in the White House wants to hear.  Nope, not at all.  Not that he really cares is people get sick from a vaccine rushed to market so he can improve his sinking chances of re-election.  He is desperately trying to keep America from firing his blighted ass.  Not that he has ever demonstrated any concern for human life.

And that lie of his about using his own money to fund his campaign?  Only the brain dead of his base will believe that.  He will do what he's always done when he finds himself in a money losing situation... cut his losses.  Six bankruptcies, remember?  He's a failed businessman.  He will borrow as much as he can from his Russian friends.  The only one he is loyal to is himself so at some point he will weigh the cost.  As always, he will save his own ass at the expense of others.  His maybe the first campaign in the history of American politics to file for bankruptcy. 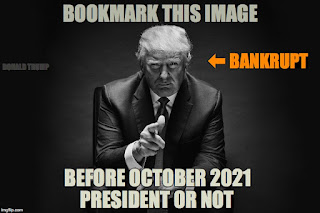