The problem with Leaping

Well, it has finally arrived.  Today's our Leap Day, in our Leap Year, a rare occurrence and a bad day on which to be born.  I understand most babies being delivered today celebrate either the day before or the day after... but what do they with their driver's license?  If your birthday is the 29th of February, can you magically change it?  Otherwise you'd be learning to drive when you're only 4.5 years old.  How old will you be before you are actually legal to vote?
I saw this morning there's more evidence of the coronavirus heading into its Community Spread phase; new cases is Washington, Oregon, and California.  Of course, the Idiot Jerk has taken that leap off of stupidity's cliff.  Remember the Sharpie incident?  When he used his Sharpie to track a hurricane into Georgia?  He's using the same stupid, little gray cells now.  Yes-sir-rity.  He believes the virus is going to miraculously disappear in April...   I do not doubt that one of his henchies has told him this is going to be just like the Flu, because that's what he wants to believe.  And his base is following his lead in leaping off stupidity's cliff as well.
While most of us see Leap Year as being a bit of an oddity, the Idiot Jerk is so bouncy in his land of delusion he is leaping here, and there.  The truth is out there, though.  He's telling Republican voters in South Carolina to vote for Bernie.  This is because he's terrified of Biden, and believes he'll stand a much better chance of getting elected if Bernie gets the nomination.  Dumb shit.
I understand he's also leaping towards the idea of giving Americans another tax cut if the economy fails to recover.  He has no problem putting the country even deeper into debt, just so he can swing an election.  There is one thing you can count on, his base is going to loyally leap to his side.  Every time they hear refund their dirty little hearts sing 'ca-ching! ca-ching!'  Even if you told them there's not enough money in the bank to fight the coronavirus they wouldn't care.  His base is just like him.
Anyway, this is a great year to look forward to: 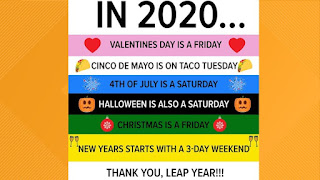 Oh, and don't forget, in November we get to fire the son of a bitch in the White House.