Wow!  I get to go back to work today!  Now, ain't that exciting?  And it's Inventory Day!  That day when purple vested Regis associates storm the building in attempt to count every single piece of merchandise.  Hhhmm, well, at least they're going to bring in free food, usually thousands of chicken nuggets.  yum
Oh, and what about the Boy Scouts of America filing for bankruptcy?  I used to be a boy scout.  I don't know if there was any sexual abuse going on in my troop or not, nothing ever happened to me.  What I find ironic is that most Cub Scout and Boy Scout troops are affiliated to some degree with... churches.  When I was a Boy Scout we held our meetings at a Methodist Church.  What is it with religion and pederasts?  We really need to feel sorry for those little Catholic boys, the ones who were both alter boys and boy scouts.
And, of course, I had my sewer line fixed yesterday by Pronto Plumbing, which is evidently a subsidiary of Secco.  The blockage was in a Terra Cotta pipe about 3 feet from my foundation.  The tech used tool which shot sound into the ground to locate the problem.  Really neat.  He spray painted an 'X' on the ground and said "that's where they dig.," and dig they did, with a little backhoe.  Two feet down they hit... 'the hub.'  Years ago, before PVC, Hubs were used for joining Terra Cotta and cast iron pipes, and amounted to a simple, round, concrete encasement.  Underneath the 'hub' was a trap that was clogged with...a lot of shit.  They replaced a 5 foot section, and the 'hub'  with PVC.  They started at 12:30 PM and finished up 2 hours later.  I was told this was an easy job, though it was still pricey.  That doesn't bother me.  Most of it is being paid for with my Income Tax refund.
As for the dogs, they had so much fun; all these strange men to sniff.  Run outside, bark bark, run inside, bark bark; they haven't had this much excitement in years.  Believe me, they were tuckered out!  After his dinner, Biggie collapsed on the front sofa. 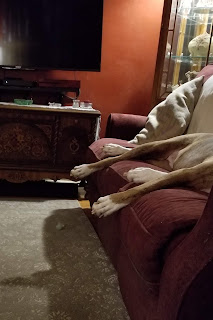 As for The Body in the Well... I've got 29 pages to go in this edit.  I've just begun working on the chapter called 'Camp Town Ladies,' and in case you're wondering... yes, there are Camp Town Ladies in the book... and they do sing.
Posted by Dave R at 6:24 AM