Can you believe it? Saturday... and it seems as though only yesterday it was Friday... Oh... I guess it was.  Oh... sorry for my calendar faux pas.
My little Spanish customer was back in the store yesterday.  She  needed to pick tile for her bathroom and, because of floor problems, vinyl sheeting for her laundry room.  She had seen that if she applied for a credit card she could get $100 off her charge, and so wanted to apply.  This is done by keying information into the credit card key pad.  She needed to give me her driver's license so I could verify her address.  Dear Me... she's 87 years old... and wants to have new flooring put in her bathroom... and she confused the first 3 digits of her social security number.  She told me "I haven't had to give this out in years."  In the end she was denied (awe...), though I will admit to being relieved.
And I don't know about you, but I had to laugh when I read Bernie was warned that the Russkies were trying to get him elected.  (awe...).  That's right, they want either he or the Idiot Jerk in the White House in 2020.  No wonder the Idiot Jerk was furious when both Democrats and Republicans in the House were given this information.  You see, the Russkies don't  really care who's President, as long as that individual is a disruptive force in American Politics.  What a slap in the face to the Idiot Jerk that must have been.  They don't really like him (awe...).  For them, having an egotistical, self-centered, white supremacist, misogynist in the Oval Office is an asset.  And because of Bernie's crazy, socialistic tendencies, they see him as being just as disruptive (awe...).
Another little tidbit that came out on... Thursday, I believe, is that the White House is considering an additional $26 billion in aid to America's farmers.  The Idiot Jerk's trade policies were born to fail... just like him.
Finally, I thought I'd give you and updated picture of my Christmas cactus. 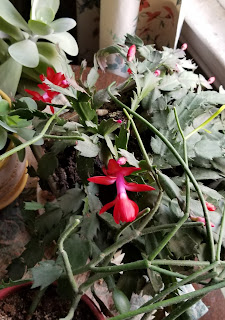