Well, my 3 weeks of crappy schedules starts tomorrow.  Even though I'm in the system for consecutive days off, I don't have any.  I did talk to our store manager... who will talk to our scheduler.  We shall see if things go back to the way they were.
My 87 year old Spanish woman purchased her flooring yesterday.  Personally, when I get to be that age, I don't want to be taking on any major house projects.  I don't believe she understands the complexities of ripping out an existing tile floor in her bathroom and installing a new one.  She's having vinyl put down in her laundry room.  To do that, she needs her existing appliances disconnected, our installers will not do that.  I put notes in the system for them to remind her what needs to be done, and suspect they will arrive to find the job site is not ready.  Renovations are rarely enjoyable occasions.
The temps here in Central PA are forecast to go up into the 50's (F).  Looking ahead, Accuweather is predicting some cool days ahead, but for the most part I do believe winter is over.  I'm not going to say we're not going to be getting snow, or sleet, or freezing rain, but the chances of that happening are getting slimmer every day.
And, for those who haven't seen the news, Bernie won Big Time in Nevada yesterday.  There were no Republican caucuses because the party of the Idiot Jerk in the White House was concerned opposition to his hate filled agenda.  Rather than let voters voice their opinions, allow them to show their discord, the GOP shut it down.  That's almost fascist, you know?  As for Bernie?  A lot of people voted for him.  Many may not like his winning, but it is Big for the Democrats.  We are unifying behind one candidate.  I will admit to being surprised.  Latinos and young people said yes.  Middle aged and older white voters said 'yes.'  If Bernie is the nominee, the Idiot Jerk believes he'll be elected top a 2nd term.  That will not happen.  As Bernie said when he declared victory yesterday, 'the American people are tired of having a President who lies daily.'  This is the truth.  America is fed up with Republicans.
On a lighter note, I thought I'd post a pic of Biggie. 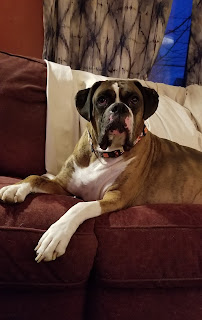 Apologies if I posted this one before, but he is my big baby.
Posted by Dave R at 6:18 AM