Oh my gosh... it's sooooo early.  I  got my creaking, old but out of bed at around 0415.  No, no, no, I wasn't anticipating the New Hampshire primary results, I went just went to bed a little earlier than usual.  I have a bit of a sore throat, well mostly a swollen gland on the left side, so there's some sort of infection.  Or maybe it was just the fact that I've got to go back to work today (cue my favorite words).
My schedule has been posted for 3 weeks out and again I've been given split days off.  That doesn't make me happy in the least.  I have a plumbing issue which will need to be taken care of, so that will fix the scheduling issue.
I've been focusing on finishing the book.  Cycling has been put on the back burner.  I have 80 pages to go and I'm ready to put this baby to bed.
I made egg rolls yesterday.  Scrumptious. 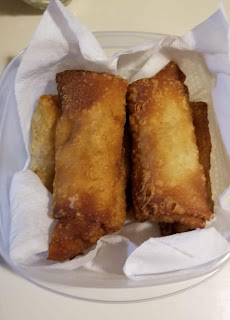 I'm taking some to work for lunch.
Oh, and Bernie pulled one out of his ass last night in New Hampshire, in case you didn't know.  I'm sure that old man ran around shrieking "we're on a roll!  we're on a roll!"  That old fool is not in the least bit scrumptious.  Buttigieg picked up more delegates and is still in the lead.  Two more candidates dropped out, Yang and Martin.  I saw where Tulsi Gabbard (sp) held some sort of election night fete where they gave her a lei. She wants to  be a spoiler, you can tell by her arrogance.  Personally, I think she's a little to brittle to roll with the punches.
And then, of course, there's Roger Stone.  The Idiot Jerk in the White House wants to cut down his toadie's jail as much as possible.  And Billy Barr's doing everything in his power to make it happen.  Isn't Billy and Evangelical?  You know?  That sect which believes you can do whatever you want as long as you believe and ask for forgiveness?
And finally... Hello Italy!  Here's a big shout out to all of you wonderful Italians for reading my blog!