Tuesday, and I can only wonder what fun we're going to have today.  I get to go to work, of course that's not fun.  Right now, I can say I'm only waiting for my W-2's in order to get my taxes out of the way.  They're done as soon as I get the forms.  Don't putz around, get it done.
I went to see "The Rise of Skywalker" last evening.  I liked it... except for the action sequences at the beginning.  Now, I know there are those out there who need things to start with a bang... however, those sequences had relatively little to do with the story.  For those of you lore fans out there, the ones were expecting every teensy, weensy, itsy bitsy question they had in their minds to be answered... it doesn't happen.  I didn't buy my ticket, popcorn, and beverage just so I could sit in my seat checking off boxes on a laundry lore list I don't have.  As I said, I liked it.
And by now, just about everybody in the world and his brother and sister realize the Idiot Jerk's dust up in the Middle East is all part of his re-election strategy.  Also, by most accounts, unless you're one of his brain dead supporters, that strategy is failing.  But then you have to remember he was born to fail.  That's what six bankruptcies tell you.  Oh, wait he was a hit among a certain crowd on his Reality TV show...  The sad thing is, he believes the camera is still rolling.  The truth is he spends a lot of his time playing golf and making bad decisions.  He keeps his Christian base happy by throwing them another Big Mac every now and then.  Their morals are just as corrupt as his.
And finally... yesterday, as I was cleaning up the yard (I have big dogs) I made a startling discovery:
A winter mushroom. 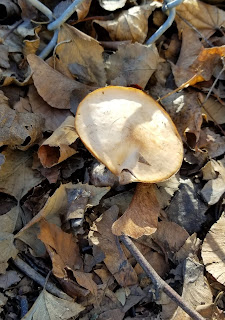 I looked on line to see if I could identify this fungus...  Nope.  Don't worry, I'm not about to eat it, but I was surprised since I didn't think they grew at this time of the year.
Posted by Dave R at 6:37 AM