If you wanted to, I suppose you might call today my mini-hump day since I work today and tomorrow and then have 3 days off.  It's going to be a mini-vaca... again.
I was planning on riding the Highspire ride last evening when I got home from work.  Instead, I changed into my sweats and continued my read through of The Body in the Well.  Yesterday I also talked to Cori, my cover-artist.  She's going to do a couple of sketches we can talk about.  Cover art can be simple or it can be complicated.  As an artist, she prefers the complicated.  The cover is the first thing readers see and as such needs to advertise as well as tell a story.  The cover needs to pop.
And also, yesterday as I was heading out to work, I noticed that the rose by my front porch still has green leaves. 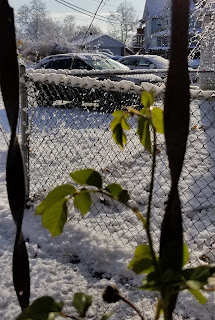 Isn't that interesting.  This is most likely due to the fact that my 115 year old home doesn't have the best of insulation in its walls.  In fact, I'm fairly certain that whatever insulation does exist consists mostly of mouse nests.  With the temps this winter barely hitting the 30's (F) this rose might stay green all year round.
I saw where Justin Beiber claims to have Lyme Disease.  I have no idea whether this is true or not.  I do know I worked with an associate who told everybody he had Lyme Disease for quite some time... and didn't.  And Bieber's a celebrity who's also setting up a YouTube channel to document his health struggles.  Oh, he also released a new song, with a new album on the way.  I did listen to the first 40 or so seconds of Yummy.  What a piece of shit.  Does anybody know what his voice really sounds like?  That's the big problem with Pop music today.  Every sound is filtered and modulated to the n'th degree of artifice.
The Idiot Jerk in the White House lorded over a rally in Ohio last evening.  He bragged about assassinating  Soleimani... and his fan base went wild.  He mocked Democrats... and his fan base went wild.  They feast on his hatred and mockery.  They are the Republican Party.  The selfish MAGA heads who care only for themselves and their creator, the Idiot Jerk in the White House.  Unfortunately, like the jobs market, his fan base is not growing and is, in fact, going into a slow decline.  Amazingly, they are a lot like Beiber Brains, hearing only what they want to hear.  They do not understand the spheres are aligning against them.  They have chosen to take the wrong evolutionary path and will dance themselves into oblivion.
Gee, that sounds almost profound... maybe I should brew another pot of coffee.

Email ThisBlogThis!Share to TwitterShare to FacebookShare to Pinterest
Labels: Donald Trump, Highspire, Justin Bieber, The Body in the Well