Sometimes the stars do align!  On my work calendar... today is my Friday!!  Of course our weather forecasters are calling for a drizzly wizzly weekend.
My first book on Scotland arrives today: 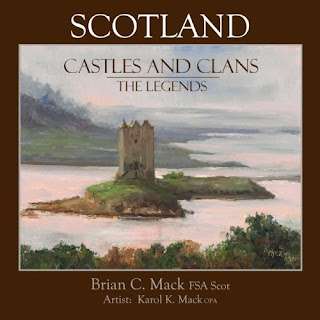 A friend asked me "will Eli and Max be wearing kilts in their new adventure?"  Honestly, I hadn't given the idea much thought, though I have to admit having them wear woolly tartans is rather appealing.
Two nights ago Biggie had an issue with the stairs.  He made it about halfway up before his foot slipped and he went bangity bang down them.  Scared the crap out of me.  He was fine, but I realized I needed to tack down something to make them less slippery.  So last evening, rather than ride my bike, I laid down stair treads.  And, of course, neither dog wanted to walk on them.  Lily kept her paws off them, using bare stair to either the left or right.  Biggie simply refused... until I stood at the top waving a biscuit.  You'd have thought I was waving a sirloin steak.  Two days from now, neither will know those treads are even there.
And I guess our government is warning civilians to leave Iraq.  All because of the Idiot Jerk in the White House.  And in this country, farmers in the mid-west planted corn rather than soybeans because of the Idiot Jerk's tariffs... and there were a lot of failures.  The Republican party is preparing to devour itself.  That's life.  Perhaps if they hadn't so desperately wanted to rule the world.  Karma is coming.  It is going to be really ugly.