I get to go back to work today.  The thrill of excitement is not rippling up and down my spine.  The next 2 months are going to be fairly slow.  It's a seasonal thing.
I did make pork and sauerkraut yesterday.  Traditional thing, you know?  It's supposed to be good luck which is a bit amusing. You see, there really is no such thing as luck, merely Probability.  This is a difficult conception for some, since they want to attribute events in their lives to either good luck, or bad luck.  Everything can be explained by mathematics.  Unfortunately, most of us don't like math.  I, personally, detest it.  I find the whole science illogical.  When I was in college I took a math course, I thought it would be easy credits.  Wrong.  I ended up taking it pass / fail, which meant I got credits but all I had to do was pass the damn thing.  Why did I have so much trouble?  My mind moves illogically.  I will be the first to admit that.  I should investigate, but I suspect this is a problem for people with a creative bent.
And, of course, yesterday being the first day of the New Year, I had to go for my first ride.  I use Rouvy training software.  And since it was the first day... of the New Year, the zeroed all of my last year's stats. 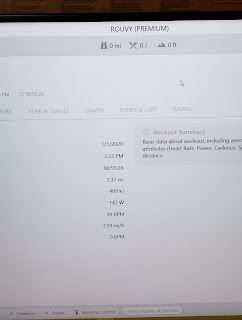 It's a little difficult to see, but they have given me a Fresh Start.
And since I've developed this interest in Scotland, I thought I'd ride through Mennock Pass.  Even though the ride is only 7.37 miles long, you climb over 1000 feet. 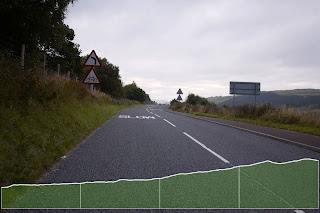 And, as usual, there are dots on the map to indicate certain highlights.  In Greece it was deer running across the road.  On Mennock Pass it was a herd of sheep.  As I approached, one guy in particular chose to cross the road. 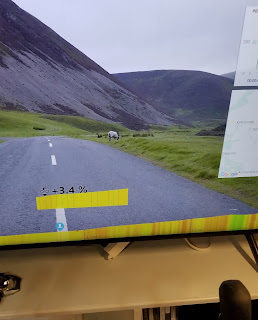 Unfortunately, he had already crossed the road by the time I grabbed my phone to take a pic.  Anyway, I now have stats for 2020. 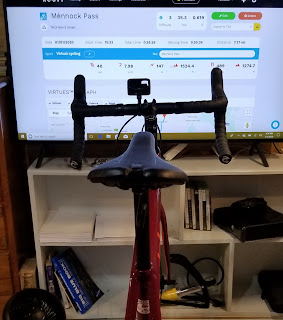 As I said, a Fresh Start.