Well, we had some snow.  Total here at my house comes in at about 3 inches.  It's not really deep enough for the dogs to get excited.  They like to barrel through, sending plumes of snow scaling up into the branches of the the River Birch.  It sure does look pretty in the morning, though. 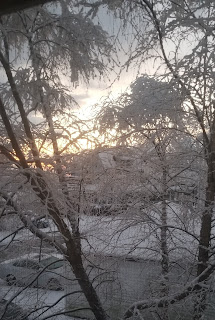 While my neighbors spent the necessary minutes last evening clearing their sidewalks, I spent my hour wisely... editing The Body in the Well.  I had to go buy bigger binders for the three people who read and critique.  In about three weeks I should begin to find out if bigger really is better.
Being that this is a day off for me, I usually end up doing laundry... surprisingly I am all caught up.  I am planning a nice ride for this afternoon.  It occurred to me that I should actually see if there are any in Pennsylvania, since I live here.  If there are, I imagine they will be very hilly unless they are in the eastern part of the state.
And I saw Iran launched missiles at two bases in Iraq.  Retaliatory, as a response the to assassination of Soleimani.  Will there be a response from the United States?  Well, the Idiot Jerk is stupid enough.  A large majority of Americans oppose a war, but we all know he only cares about what his minority base thinks.  He's certain that because he managed to pull a win out of his ass in 2016, the same thing will happen in 2020.  However, However, Gallup published stats on political parties which should give him heartburn.  47% of American voters consider themselves Democrats, 42% liken themselves to the Republican Party.  This is interesting since his approval rating barely manages float above 42%.  That's right, a minority group is dictating how this country lives.  Even when we kick their asses out of office, they will never understand their place in the world.