My weekend starts today, so I slept in the morning... but only by an hour.
My chores for today are the usual: clean and do laundry.  Working on the book is a given.  That happens every day.  I'll also turn on the Xbox One.  Since Cyberpunk 2077 has been delayed until September, I've begun playing the original Mass Effect... for a 3rd time.  My character is more of a renegade this time through... can you imagine that... me... a renegade.
One thing that is going to be very good for today is that the sun will shine throughout.  The temps are going to be in the mid to upper 40's (F).  So far, this has not been a terrible winter.  We had rain from Friday into Saturday and the little snow we had was washed away.  This does not mean I didn't have to sit and listen to customers complain.  One woman griped about how "it rained all night... at least it wasn't snow."  I just sat there and smiled.  Some people can never be satisfied.
I also need to get a ride in today.  My total mileage to date is only 120.  To hit by goal of 2500 miles, I need to ride 209 a month.  There's no way I can ride 89 miles in the next 6 days.  The same thing happened last year in both January and February.  The fact that we still have a little over 10.5 hours of light per day is, I think, the main reason.  I do like to ride when the sun shines.
And don't you think it's funny that the Idiot Jerk's defense team, instead of offer a robust defense, is focusing their attacks on Adam Schiff?  There is absolutely nothing new and unusual in this tactic.  Those lawsuits against contractors?  His legal team did not provide reams of documentation on shoddy workmanship, rather he sued the contractors themselves, blaming them for offering services that were never going to satisfy the Idiot Jerk.  Attack rather than show innocence.  And quietly, behind the scenes, you know his team is terrified the Senate will vote for witnesses.... the last thing they want is for the dreaded Bolton to speak.
The people who read and critique my work have gotten dribs and drabs of The Body in the Well.  The first criticism I received was... "you started with the word 'and.'" I was told that was bad form, no writer begins a novel with the word 'and'.  And, of course, my retort was "well... I do."  This morning, walking into the writing room with my morning cup of coffee, I saw the open manuscript lying there and thought you might like to see what I see. 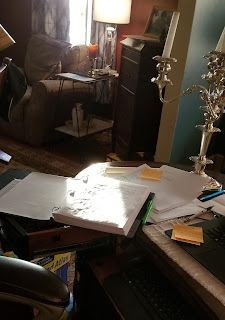 Don't you like the way it almost glows in the morning light?