Can you believe it's Monday already? 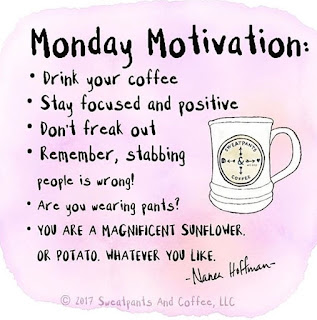 Did I tell you I don't have to go to work today?
Yesterday afternoon I did an FTP test, (Functional Threshold Power).  FTP is a good way to measure your fitness as a cyclist using wattage / kilograms (that's right, no pounds used here).  You ride a 10 minute warm up, followed by 20 minutes where you're supposed to push your limits, ending with a 10 minute cool down segment.  Being the first time I've taken this test, I made a few mistakes:  I slowed down to change gears and pretty much came to a stop for almost a minute - no wattage was recorded.  Damn!  My final score was 1.71 watts kg.  That's higher than the average of 1.41, but lower than I want.  Even at my age, a decent cyclist should have a 2.0.  I have my work cut out for me, don't I?
And what about the Idiot Jerk in the White House?  Holy Crap!  Heading into an impeachment trial, some dumb shit in his Administration thought assassinating Soleimani, however the attack also took out an Iraqi general.  Now Iraq wants the US off its soil.  And the Idiot Jerk is now threatening them with sanctions if they don't let American soldiers stay.  Oops.  And he's shrieking how they owe us money for the bases we've set up there.  Oops.  Oh, and we're now sending an additional 3000 troops to... well, hell if I know... maybe Saudi Arabia... except I believe they have a limit as to how many American troops can be on their soil.  Oh, and Lindsey Belle Graham wants the Senate to change it's rules so they can begin the impeachment trial ASAP.  That's because they thought the turd they thought was going to float even higher is doing anything but... float.  The Idiot Jerk will never be anything more than a real sinker.
Posted by Dave R at 6:35 AM