This if flipping ridiculous

Well, today's Saturday - Flo is wrecking havoc in the Carolinas.  Worry about those people, for them this is cataclysmic..
Normally, today would be my hump day, however I'm scheduled to work 6 days in a row this week.  That might not happen.  Flo is supposed to passing a bit north of here on Monday.  The forecast is for tropical rains...  I get water in my basement when we have torrential rains.  I have a pump, but I need to be here to turn the damn thing on.  Rather than come home and find a foot of water swirling around the foot of the staircase, I will most likely take the day off.  Having an expensive water heater repair is not what I want to deal with right now.
Oh, and in case you haven't seen.... Paul Manafort flipped.  This is what happens when you purchase loyalty rather than earn it.  Prepare for the Idiot Jerk to start Tweeting "he's lying!"  Interesting how everybody around the Idiot Jerk seems to be lie.  I'll bet his whole family is throwing shrieking shit storms.  This close to the mid-terms?  You see, they've been lying shit birds for years, and years.  They've never really been put under a microscope - until now.  Holy Shit Bangs!  Look what we found:  behavior so reprehensible it boggles the mind.  And since that rock has been flipped over, there's no stopping it the flow of shit.
On a lighter note, last evening my store began our Success Sharing celebration - we will be fed well for the next 3 days.  My bonus will deposited into my account on Tuesday.  It's already spent.  Well, not really, not yet.  Those $$$ will be used in my next vehicular acquisition.
And there's this Evangelical blowhard I work with, he has constant diarrhea mouth, not so much about politics, though.  He's one of those who needs to be an authority on everything.  Yesterday he was starting to run at the mouth while I was having lunch.  They were naming hurricanes and he, of course, became the authority.  Someone brought up Hurricane Agnes, which was devastating to Central Pennsylvania.  Just as he was beginning to show us his expertise on that storm, I said "no, I don't.  I was in Vietnam."  Those few words shut him up. He sat there silent, and I finished my lunch in peace.
Anyway, someone evidently wrote a book about Vietnam as experienced by those on air craft carriers.  No, it wasn't me.   Here's the cover picture. 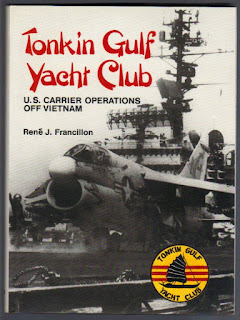 I spent a lot of hours on the bridge of the USS Constellation CVA 64.  Can't you see me waving from the window?