I had my blood work done this AM - annual physical, you know?  The VA Clinic has a new location, out off of Rossmoyne - I tell you this because traffic is freaking horrendous out there.  During normal driving times it takes about 15 minutes.  Rush hour?  Shit!  It can take 45 minutes.  And, of course, there are so many stupid drivers out there.  Like the woman in the Honda Pilot this morning who, instead of getting in the exit lane with everybody else, decided to block traffic.  That's right, she drove pass everybody else, right up to the exit, and then stopped because she wanted someone to let her gyp in line.  So, there she is, blocking traffic, and people are starting to blow their horns because now she's waiting for someone to let her in... and no one is letting her in because they've all been waiting patiently.  This is the kind of driver who causes accidents.  Eventually cars started squeezing by on the shoulder.  As I passed, I glanced over at her.  She was sitting there, waiting complacently, totally unconcerned about the inconvenience she was causing others.
And I see Brett Kavanaugh's nomination to the Supreme Court is approaching cluster fuck status.  There is some serious shit going on and their 'screw you' attitude is pissing people off... a lot.  They don't want the FBI involved because... their nominee might actually be a hateful sack of shit.  A majority of Americans are saying "Just Shut Up," and Republicans hate it.  There ain't enough Retinol in the world to fix the cracks and save their face. 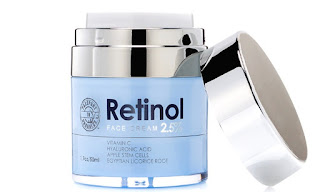 Oh, and I saw where the Idiot Jerk gave another on camera interview in which he blasted Jeff Sessions.  He was uttering some sort of nonsense about not having an  Attorney General.  Actually, he's confusing a rim specialist with an Attorney General.  Face it, Jeff Sessions is neither.
The hoot of the day, however, are his claims of a Red Wave coming this November.  The only way that would have was if Russia got involved... again.  Maybe that's what he's counting on.  It worked for him once.  Maybe lightening will strike twice.  His supporters believe him.  In fact, I saw an article in the BBC which claimed they were so assured, they're growing complacent.  You know?  A lot like that woman in the Honda Pilot this morning.  Angry people, blowing their horns at her, failed to register.  Like those who support the Idiot Jerk, she could care less.  I suspect neither know it's too late to do anything about the cracks.
Posted by Dave R at 9:39 AM