We have had rain here in Central PA for 25 hours straight.  I have some water in the basement: 1/4 - 1/2 inch in some places.  There are some dry areas.  Some places have had up to 4 inches of rain.  That's a lot.  Flood warnings are up.  Predictions are being made as to when creeks, streams, and rivers will hit flood stage.  That happens when rain has swollen them to the extent they leave their banks and invade fields, and streets, and neighborhoods, and, on occasion, wash away bridges.  On Friday, Flo is supposed to make landfall in North Carolina.  My money says that bitch is going to turn north and bring us more rain.
I just checked on Accuweather and the perimeter is just to our southwest.  Hopefully it will arrive soon, this is my day off work and I have a lot of laundry to do.  The washer and dryer are... in the basement.
As I was lying in bed last night, I started thinking about that anonymous op-ed in the NYT.  I didn't read it, mostly because I don't want to die this young.  Death you ask?  Well, yes, it might either scare me to death, or I might die laughing, neither outcome would be appreciated.  One thing did cross my mind, though.  If there is a dedicated group working to keep the Idiot Jerk in check... what would things be like if they weren't there?  Let's be honest.  This is pretty much of a cluster fuck administration, and they're using no lube what-so-ever.  I can't even imagine how bad things would be without this team dedicated to keeping him in check.  Stop!  Don't even think about it!  Don't let that thought seep in and activate your fear nodes!
On a lighter note, my Nike running shoes came yesterday. 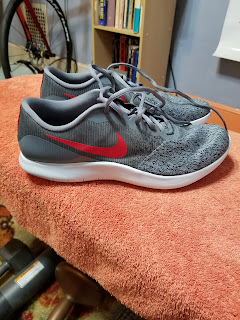 A funny thing about Nike and their "Just do it" campaign.  There are crazy, mini idiot jerks out there who are burning Nikes.  What's so funny?  In a world in which a majority of the people have darker skin, who have absolutely no problem with Nike, or Colin Kaepernick, this minority group of white Republicans actually believe they will have some kind of effect.  Hahahaha.  This teeny weeny turd of humanity doesn't realize how small and insignificant they are.  Perhaps we true Americans should start our own campaign.  We could take black and white pictures of ourselves.  Every time one of these phony Americans comments on Facebook, or Twitter, or Instagram, we can post those pictures, and our catch phrase, our slogan, our anthem can be "Just Shut Up."
Posted by Dave R at 8:05 AM