Well, I slept well last evening.  So far this AM, all I've had is the occasional cough.  That's fine with me.
I will get to work for 3 days and then have off 2.  On Wednesday, I get my annual physical.  It will be interesting to see what they found in all those vials of blood they took last Wednesday.  Probably the same thing they found last year.  Not much to get excited about.
Here's a funny, little ray of sunshine.  Susan Collins is the Republican Senator from Maine.  She's a Conservative.  She wants to hang with the old boys school, though now and they she holds out because she wants to be seen as a Republican championing women's rights.  Well, it seems there's this guy with ALS up in Maine who has started a "gofundme" project for....  Susan Collins?  Nah, he's raising money for her Democratic opponent when she's up for re-election.  But, there's a catch.  You see, her opponent will only get the money if she votes for Brett Kavanaugh.  If she votes against Brett, all that money will stay in the donor's bank accounts.  This is her constituents telling her to vote "no."  And she doesn't like it.  She's calling it bribery - but there not paying her anything.  Of course, the Republicans don't like this.  They hate when their constituents tell them what to do.  And the last time I checked, Susan's constituents had raise over 1.3 million dollars.  In Maine, that's a lot of money to give to your opponent.  If she votes "no," she has nothing to worry about.  Now, doesn't that brighten up your day a little bit?  Thinking of poor Susan, way up there in Maine, being told by the voters what they want her to do?
This is such a hoot.  Nothing seems to be going right for the Republicans.  Their tax cut is failing them.   Rosenstein wanted someone wearing a wire so they could record the Idiot Jerk in his rantings.  The Idiot Jerk's choice for the Supreme Court (you know?  The one who doesn't think a sitting president should be investigate?) is seen by a majority of Americans as a bad choice.  There's also the fact that they can barely hear each other over the thunder of the approaching Blue Judgment.  Their end is nearing faster than they can blink.
Anyway, it's going to be a drizzling, rainy day.  In fact, they're forecasting shitty weather for the next few days.  More rain. The Midterms are coming.  Here's something to look forward to: 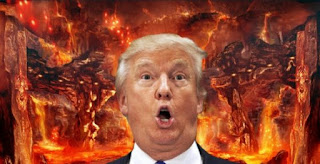