Okay, so I had to give a customer some bad news yesterday.  I felt  bad.  She wants to have vinyl planking installed and... her floor is not level.  Wit vinyl planking you floor can not deviate more than 3/16 of an inch over 10 feet.  The problem is that it is a click lock product, and there is the possibility it might un-click.  She has a 4 foot by 4 foot section where the deviation is 3/4 of an inch.  That's some serious floor leveling.  Very expensive.  Her house was built in 1997, so I warned her this might be the case.  She, of course, said "that's not going to be a problem, my floors are level."  Wrong.  Over time houses settle.  Their foundations shift.  They always do.  You cannot not stop the Earth from changing.  Because she walks on her kitchen floor daily, and because this 3/4 inch is not an abrupt change, she doesn't realize how out of kilter her floors are.  This is life.  No matter how balanced we think things are, more often then not, they are often slightly askew.
Like Rod Rosenstein's flippant comment about recording the Idiot Jerk in the White House.  That was a good joke, with serious overtone.  The Idiot Jerk found his sense of humor more than a little uneven.  Or take the Brett  Kavanaugh nomination.  I guess he went on Faux News last night in an attempt to appeal to white supporters of the Idiot Jerk in the White House.  The Idiot Jerk believe he could  Republican members of the House and Senate stabilized...  but then he's an Idiot Jerk.  But then he is the Idiot Jerk in the White House.  For years he's always had someone nearby who could clean his ass every time he shit in his pants - that's no longer the case.  The funny part is that if he fires Rosenstein, the Blue Judgment will investigate, and scour out, every nook and cranny of the Idiot Jerk's life.  The same thing is going to happen if Kavanaugh gets a seat on the Supreme Court.  The balance beam he's trying to walk down is warped from here to hell and back.  In fact, Kavanaugh's beam my be a little too bent.  There's a good chance, if he gets the vote, that he might be the first sitting Justice to be investigated.  Now ain't that a hoot. 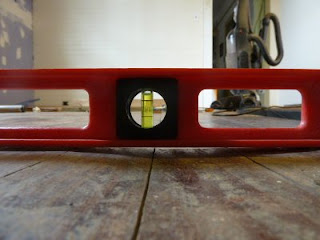 Anyway, I will see if I can have the installers call the customer today and explain what's involved with leveling a floor.  There are options available other than vinyl planks.  The decision will have to be hers.
Posted by Dave R at 6:09 AM