Sometimes I have to deal with stupid people.  I often wonder what is going on in their heads since logic seems to have abandoned them.  I had woman come up to me yesterday with an emailed receipt on her phone from a purchase she had made several months ago.  Standing in front of the same type of vinyl flooring she had purchased, she told me she wanted me to match the price.  You see, she had purchased that vinyl when it was on sale... several months ago.  Since her original purchase, the price had gone up .24 cents. 😂🤣😂  She could not understand why I could not match that same price, in fact, she grew irritated.  I told her everything goes up in price.  I laughed a lot after she left.  Not only did I laugh, everybody I told laughed as well.  I'm still laughing.
Then there was the gentleman who asked for a lot of help purchasing tile, and thin set, and grout.  He's going to be installing a tile floor in his dining room.  He asked for advice the best information I could.  Then, as he was leaving, he asked about getting one of our credit cards.  The love when customers get our credit cards - they tend to buy more.  After he asked about the card, he told me that he had just lost his job last Friday.....   Think about it now.  Stupid?  Sure, he's going to be getting unemployment for a few months.  And in PA you can work part-time and still get your unemployment.  But, if you're not working, it's not too wise to take on an expensive project - like installing a tile floor.  Like I said, I deal with stupid people sometimes.
And I'm not going to mention the moron who wrote that the Idiot Jerk's political career was hanging on how well he handled Florence.  At this point nothing is going to save his neck.  In this country, Democrats outnumber Republicans, by a lot.  That's bad for the Idiot Jerk.  He and his Evangelical junkies have done nothing but piss of Centrist and Independent voters.  They don't understand that when they say "my way, or the highway" we"re going to kick them out the driver's seat and out of the car.  Stupid.  People are so stupid.
They fed us yesterday.  We're getting fed again, today.  Food is good.  Today's forecast is... cloudy, and Florence begins to turn north.  She's going to pick up speed now as she pisses away what's left of the tropical moisture she stuffed herself with.  Supposedly we're only going to get about half an inch.  We will wait and see.
Finally, I Googled 'stupid' to get some pic for today's blog and, I kid you not, my screen filled with picture after pictures of the Idiot Jerk in the White House and his ilk... or spawn...   Evidently their family portraits have now become synonymous with "dumb fucks."  This one I think really hits the stupid nail on the head. 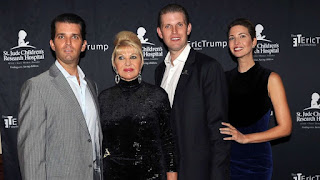