So, it's Monday, the beginning of a new work week.  Rain is in the forecast, starting this afternoon and lasting until tomorrow.  Just what we need, another nuisance rain.  Otherwise, everything is ducky dandy... unless your name happens to be Brett Kavanaugh.
Holy Smoking Jesus!  There's another accuser!  And the GOP is now calling this a smear campaign.  Give me a break.  In a weird way they're right.  Just look at them.  With their faces covered in shit, all they seem to be able to do is smear it around.  They will never be shit free, but their hope is to spread it thin enough their base will swallow it.
Right now, Democrats have a big edge in the approaching midterms.  This hoo hah about the Idiot Jerk's nomination for the Supreme Court is only going to make the GOP look worse.  They are losing women voters.  They're bleeding them away.  The fact that they have an Idiot Jerk in the White House whose mantra regarding accusations of sexual misconduct has always been to deny, followed a wallowing plunge into the pool of "fake news," makes their position even more dire.
Anyway, I was playing with my nuts again last night when I got home from work.  There are 3 huge containers of them down in the basement.  So far, it seems that for every 9 nuts I husk, only 6 are good enough to keep.  The rest have sat sallow for too long, they're too old, their husks are too dark.  Now and then some of them have little white worms.  Those get thrown away.  The last thing I want is to have worms in my nuts.
Personally, I suspect that the big problem with the GOP is that they didn't watch enough TV game shows while growing up.  That's right, they never had the chance to be tutored by Uncle Monty.  Nope.  Instead, they ran around in their little navy wool suits, barking kiddie orders at the few friends they had.  Just think about it.  They've always been desperately trying to be in charge.  They never learned how to play with others.  Sadly for them, their president truly believes he is Uncle Monty, and no matter which door you open, there's always a gag prize.  Like nuts with worms. 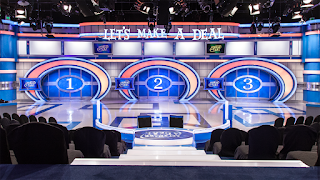