I went to see "Ant Man and the Wasp" last evening.  Paul Rudd, you know?  I liked it, a lot.  Paul Rudd, you know?  There is a villain..ess, but not in the normal definition of villain.  Mostly there were people interacting with situations they don't quite understand.  There are recurring themes, like magic, which repeat as variations.  I always enjoy that, and have always had immense regard for a writer who pulls it off.  I say this because Paul Rudd is also given writing credit, and the guy is funny, and creative.  How nice to see a middle-aged hero who has a heart. 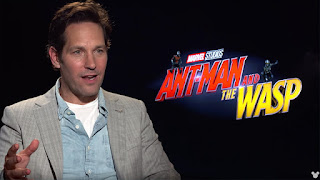 And the Idiot Jerk in the White House is sowing his seeds of disruption in the UK, in case you didn't hear.  If he has zero tolerance when it comes to taking children from their parents, do you really think he's going to care about what the Brits do?  He wants an abrupt Brexit.  He wants England to take a dull ax and use it to chop away chop away all ties to the EU.  He hates the EU.  But then, he hates so much.  He wants respect but then does nothing to earn it.  He thinks you owe it to him.  What a scumbag.
I saw this AM that Mnunchin, another greed bag if there ever was one, has said "talks with China" over tariffs have broken down.  And Paul Ryan has come out saying these tariffs are "bad for the economy."  Get ready folks, this is going to get worse.  The best thing to do is cash in your chips now and just wait it out.  When the dust clears there will be no more Idiot Jerk.  The GOP / Republican Part will be nothing more than tattered shit paper blowing in the breeze.  I say that because I saw a blurb in the WSJ where they were talking about how the Idiot Jerk's tariffs were destroying the GOP.
And finally, I had a weird dream.  I was waking up the gods... and I had just finished talking to number 13 when the dogs woke me up.  There are only 12 Olympian gods.  I've no idea where #13 came from.  Nor do I have any idea why I was the one waking them up.  Interestingly enough, after I had roused them from their sleep, I hid them so know one would know they were awake.  The were waiting for something.  Curious.
Posted by Dave R at 6:56 AM