Well, when I got home from work last night I did a free weight workout - upper body.  The end result was Bojangles arms, you know?  Rubbery.  If I was from Pittsburgh, I'd say I had gum band arms.
And the Tour de France ended yesterday.  The winner:  Geraint Thomas was the winner from Team Sky, UK.  I'm glad he won.  I'm also glad this year's tour is over.  It as definitely not one of the best.  Right from the start there were issues.  Chris Froome should have withdrawn right from the start.  You see Chris tested positive for having twice the legal limit of an asthma medication in his blood.  Does Chris have asthma?  Let's just the Team Sky doctor gives him the prescription.  Protesters following him through out the entire race.  The wave signs.  The yelled angry words at him.  They spat on him.  If he and Team Sky thought he'd win a 4th Tour they were mistaken.  Did he possibly end his career?  Maybe.
There were serious crashes right from day one.  Oh, and Cannondale showed up in their hideously pink kits.  I like pink.  It's an aggressive color.  But no one should be riding in the Tour wearing Spandex from the Barbie cycling collection.
And then there were the farmers.  Evidently there is some way Brexit is going to effect the subsidies they receive.    In their minds the best way to bring attention to their plight, their most opportune method for gaining sympathy, would be to roll bales of hay onto the route in Stage 16 and stop the race.  What they actually accomplished, on the world stage, was to shit in their pants.  No one said... "oh, those poor farmers."  What they ended up with was a mini-riot... with tear gas.  Ils ont les tetes de merde.  Oh, and it seems they are now under investigation.
And yesterday, sometime in the morning I think, the Idiot Jerk in the White House tweeted out another threat to shut down the government if he didn't get his wall.  Holy Crap!  Didn't he sing this song before?  And fail?  Of course this isn't about building the wall.  Nope, his dimwitted base loves this shit.  And this shut down is supposed to occur in September, just before the mid-terms.  Whether you know it or not, this is 'the art of the deal.'  Oh... my... let's be scared.  He caved before, he'll cave again.  Empty threats.
I'll end with a pic of Lawson Craddock - from the Cannodale Team.  He crashed on stage one and broke his scapula.  And came in last place on the stage. 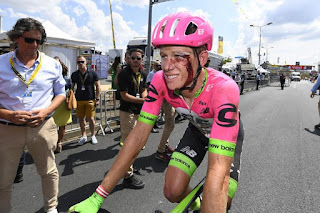 A lot of cyclist would have dropped out.  He didn't.  He is a certified Lanterne Rouge - last place finisher.  He also did something wonderful along the way.  Lawson pledged $100, for every stage he finished, to help rebuild the velodrome in Houston he had rode in as a junior.  A little storm called Hurricane Harvey did a lot of damage.  So he rode, and finished every stage.  And along the way people started taking notice... and started donating to help his pledge.  By the time he rolled across the finish line in Paris yesterday, in last place, he had raised almost $200,000.  Can we talk about heroes?
Posted by Dave R at 6:36 AM