A broken crank... and the Greenbrier

That's right, and I'm to blame.  Stripped it, I did, the result of impatience.  You know what I mean?  There are times when it's just too difficult to take it slowly.  Anyway, it's stripped.  I did it while changing pedals for an ride on the roads.  In too much of a hurry, I used an allen wrench instead of carefully threading in the pedal.  Cranks are made of aluminum. Pedals are made of steel.  The hardness of steel will carve away the softer crank threads if care is not taken.  And I was in a rush and careless.  As a result, the left pedal wobbles.  This is not a good thing, a broken crank and a wobbling pedal.  Later this morning I'll call World Cycle & Ski and have them rethread the crank.  Believe me, I will only let the best touch my crank.
And I was reading that a majority of Americans want a Supreme Court Justice picked before the mid-terms.  This, I suspect, has more to do with the way the Republicans shit around with the last justice.  This puts them in a bind, however.  If they vote in an individual who doesn't match Kennedy's middle of the road viewpoint, they will get voted out of office.  As I've said before, their biggest fear is losing their job.  The last thing any Senator wants is to be fired by the American voter.  Such a termination means that a majority of people think them unfit to do their job.  Of course, the Idiot Jerk in the White House is dumb as a fucking brick.  He has so much hateful disdain for those who mock him and treat him like the turd, choosing an ultra conservative candidate would let him stab a majority of those Americans in the back.
Speaking of the Idiot Jerk, I see where he's going to be spending his holiday at the Greenbrier.  Some of you may be familiar with the resort as it gained quite a bit of notoriety when word got out that it sits above a massive underground bunker.  You know?  The kind of place the president is supposed to hide in during a nuclear event. 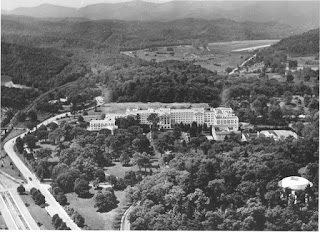 He's not staying in Washington to watch the fireworks over the Mall.  Nope, he's going to the Greenbrier.  Could he be scared that something bad might happen on our most honorable holiday?  The day we celebrate the birth of our nation?  Or is he just a dumbshit?
Posted by Dave R at 8:22 AM