Today is the 2nd day of my new schedule: 0800 - 1630.  When I got home from work yesterday I was a bit tired and lounged on the recliner for about a half an hour.  Adaptation is the key.  For years, and years, and years I worked this shift so I don't think the change back will be too difficult.  A friend of mine said it should take about 2 - 3 weeks.  I don't think I'll need nearly that much time.
The new torque wrench arrives today.  I'm stoked.  Since this is the first time I've every removed a crank, I've watched a number of videos.  Most of them fail, not in their basic instruction, but rather in their omission of how much torque has been used to tighten that crank.  Except for one guy, every video started out with the instructor saying "this crank has already been loosened."  Getting the crank loose is the most difficult part of the procedure.  None of them want to show how much they had to struggle... except for one guy who said "getting that loose is a real bitch."  They don't talk about leverage.  Nope. Leverage is very important.  A friend of mine at work told me he puts a pipe over the wrench to get even more leverage.  Using leverage is a good piece of advice.
Levers are every where.  We use them daily, mostly without thinking about it.  They can be simple, or complex.  Levers are how we get things done. 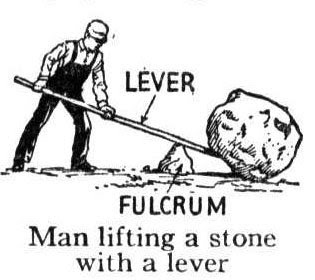 Not using a lever is how we fail to accomplish out goals.  That's what happened in November of 2016.  A majority stayed home while a minority went to the polls and used their levers.  Woah!  Now we have an Idiot Jerk in the White House.  He is not about change, he is about disruption.  He creates chaos so a few might gain financially.  Who wants to be a dictator?  He wants to be a dictator.  He understands nothing.
This coming November we need to use the lever our Constitution has given us to move this pile of shit out of the White House.  And those who support him?  They also need to go.
Posted by Dave R at 6:22 AM