Well, here it is Wednesday... time to go back to work.  But only for 4 days.  I'm off again on Sunday.  The funny thing is that yesterday seemed a lot like Sunday.  In fact, here of late, none of my days seem like days of the week, they're just time off.  I do hope this isn't an age thing: not really caring which day of the week it is... or was.
I saw where the Idiot Jerk in the White House tried to do some backpedaling... and failed.  He just can not admit that Russia has been attacking our election system.  He loves Vlad.  His dear Vlad would never do anything to hurt us.  He wants to be friends.  This is why he can only, kind of put the blame on Russia, "it might have been others."  Yesterday he shit on Democracy with one of our greatest enemies.  Never let him forget it.
In case some of you are wondering what I did with my old crank, well, I'm using it as a decoration... sort of...  A friend at work said I should try and turn it into a lamp.  I have no idea what my crank would look like as a lamp, and have no intention of trying to make it into one.  Instead, I've hung it from a shelf in the cycling, workout, computer room.  Next to the Ecuadorian Tribal Mask my grandmother brought me from...  Ecuador.  Everybody in my family hates this mask.  I like it. 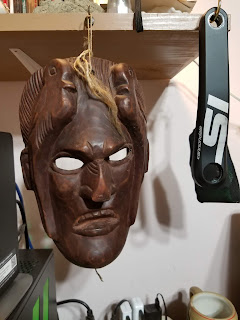 Don't you think it looks a bit... cranky?
I also went to the dentist yesterday... six month checkup.  They want me to spend a whole bunch of $$$ for dental work.  I have a number of fillings.  They tell me there's absolutely nothing wrong with those fillings.  However, they'd like me to replace those fillings with expensive crowns because they're running a business.  Every time I open my mouth for my dentist he says "crown, crown, crown, bridge, crown crown."  And I say, "nice try, looks like you lost a few pounds."  One of these days when he does his little crown routine, I'll pop on my Ecuadorian and scare the shit out of him.
Posted by Dave R at 7:00 AM