Well, I went to see "Solo" last evening.  Overall, I would have to say the movie was better than I was expecting... by just a  hair.  Alden Ehrenreich playing Han Solo was not the problem.  His performance is actually one of the bright spots.  What hurt was the story.  The most obvious flaw?  The girlfriend.  Walking out of the theater, I pointed this out to my friends and... everybody agreed.  Instead of taking a minor piece of Star Wars lore, the Kessel Run, the girlfriend stole all of the focus.  If they'd cut her out, or made her a co-conspirator, and cut out the romance, this film would have been fifteen minutes shorter and much better.  Interestingly enough, the scenes between Solo and a flirting Lando Calrissian work better than the scenes between Solo and his girlfriend.  Oh, and for those interested, (tiny spoiler) there is a brief shower scene with Solo and Chewbacca, what a shame it isn't longer. 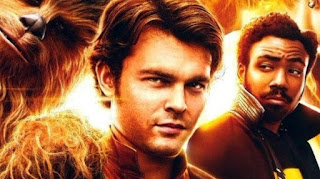 And I do believe that today the G6 + 1 are meeting, the +1 being the Idiot Jerk in the White House.  Whereas Solo would have been much better had he been flying solo, the United States parting ways with the rest of the free world and going it alone is not.  Solo is cute and cocky while the Idiot Jerk is?  Arrogant, selfish and self-centered.  We have a president who wants to be the Ugly American.  Who would want to emulate him?  Crazy conservatives.  They're going to raise their children to be arrogant, selfish and self-centered.  When those children grow up, they're going to look at their aging parents and say "go away.  You're costing me too much money."  Of course, crazy conservatives don't know this.  It is beyond their ken.
Anyway, I did do 11.2 miles on the bike yesterday.  Fun.  And no leg cramps.  Tomorrow I'll do another ride.  After this weekend, my schedule has me off for 3 Sundays in a row.  That's when I'll take the bike out on the road.  Sunday mornings are great.  No traffic to worry about.
Posted by Dave R at 7:45 AM