So it's Thursday.  For those keeping track, today is my Sunday... in other words, the last day of my weekend.  Tomorrow I'll start a 3 day stint, but then I'm off for 5 days.  Then I'll work a day and have another 3 days off.  Retails schedules suck.
Yesterday saw me accomplishing almost everything I had planned... except for the yard work because the weather was drizzly, and rainy and cold.  Today is supposed to be warmer.
I went to Dick's to get sweatpants and bought... none.  I like my legs wrapped in warm fleece, not tacky polyester.  I ended up buying another pair of cycling shorts and some gloves.
Pier 1 saw me purchase candles.  I like candles as long as they're not in jars.  Candles in jars  are a waste glass.
While a number of Americans feel the Idiot Jerk might be somewhat responsible for the economy, a vast majority want him to be controlled by Congress.  Right now that isn't happening.  The prospects of a Democratic House and Senate keep improving, much to the Idiot Jerk's dismay.  Actually, to say dismay might be a little too soft.  The idea Congress might tell him to shut his pie hole infuriates him.  Prepare for hostile attacks.  And investigations.  Republicans are terrified.  They've gone so far as to cancel their August recess to hopefully force as much of their agenda down America's throat.  They know their failure is in the offing.  Now, won't that be fresh.
The trailer for the new iteration of "A Star is Born" dropped yesterday.  Good Fucking Grief.  Bradley Cooper and Lady Gaga.  For those who don't know, Janet Gaynor was the first ingenue with talent.  She was followed by Judy Garland in a 3 hour epic which was edited down to something you could sit through (sorry all you Judy lovers).  Then it was Streisand's turn.  She won an Oscar for co-writing 'Evergreen.'  Now we're getting Gaga.  If they felt they needed to do a remake, why couldn't they try and freshen up this old chestnut, say an older woman and a younger woman?  Or an older woman and a younger man (stud muffin, you know?)  Or an older man and a younger man (interesting, right?).  Nope, they're churning out the same stale formula.
Finally, we are now 3 days away from the Bethesda E3 event.  They are not part of the actual E3.  Their showcase will be a day early, on June 10, at the Figueroa Hotel in LA.  They've already started decorating. 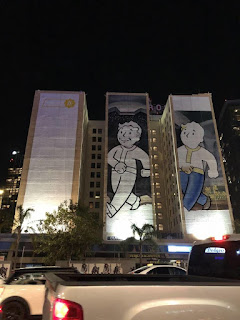 That is some really big signage.  My big wonder is why the one on the left is mostly blank.  Be prepared for some really fresh surprises.
Posted by Dave R at 7:36 AM