Well, it's Friday and the 5th day of my vacation and I... slept in... until 0630.  Yesterday was busy.  Lots of accomplishments:  weight training in the AM, 11 + mile ride in the afternoon, lawn got mowed, grass around shrubs was trimmed, and one of my wisteria vines was cut down almost to the ground.  The one in front of the house was spared because of.... a bird's nest, with 3 little blue eggs.  Hopefully today will be just as fulfilling.
One of the things done yesterday that I'd been planning to do for some time was to put a coat of Helmsman on my special nut.  Now, I don't know about you, but I have a nut which is really dear to my heart. You see, a long, long time ago, in a state far, far away, I was born.  Florida.  My dad's parents were delighted.  I was their first male grandchild.  I would carry their genes forward... oops.  Anyway, because they could afford to do so, and because they wanted to see their true heir, they took vacation and drove all the way down to the land of Florida to meet me.  I don't remember any of this, now, so am forced to go on physical evidence alone.  But one day my grandmother picked up a coconut on the beach, sometime in mid-December, 1952.  She packed it into their car and brought that nut back to Pennsylvania.  And I still have it.  My Special Nut is going to be 66 years old this fall.  Amazing, the things we pick up in life. 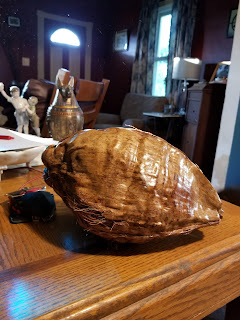 And wasn't yesterday a shit storm for the Idiot Jerk in the White House.  New York is suing to close the family Foundation - turns out the most favored charity on it's books is DDI (Donald, Donny Jr, and Ivanka).  Of course he freaked out.
There was also the video of the Idiot Jerk saluting a North Korean Major General (or whatever he's called).  The video I saw included a North Korean announcer shrieking his excitement in a brittle falsetto.
Oh, and the Idiot Jerk said that Kim had to do all of those brutal executions because he needed to be a strong leader and.... what the fuck?  That's right.  The Idiot Jerk said 'Kim's a tough guy, but he needed to be tough."  Translation:  if the Idiot Jerk ever gets the chance, he will start executing.
Now, if you'll excuse me, I'm going to find a special place to put my special nut, a place where anybody and everybody can see it.
Posted by Dave R at 8:08 AM