Saturday, and not the beginning of a 3 day weekend.  The 4th is next Wednesday and that's the day people will get off work, unless they take vacation or personal days.  I work, but then I'm off Thursday and Friday.  That's the last week I work my mid-shift schedule.
I am off tomorrow, and I will finally take My Syn out on the road - very early.  Around 0600.  Why so early?  Traffic.  I hate riding in traffic and, unfortunately, I live in a rapidly growing suburb.  When I moved to Enola 21 years ago we had a population of around 11,000.  That number has nearly tripled.  We have a lot more drivers on the road now.  While some drivers pay attention, too many others are dicking around with their phones while they drive, or singing along with some shitty pop song on Sirius XM.  Hence, I ride early.  Cumberland County does list a number of routes that are relatively traffic free, or are where old railway lines ran.  Rail trails can be great rides.
Oh, and I saw where the Idiot Jerk in the White House was pranked.  Evidently Kim Jon Dumb isn't going to denuclearize.  They have pictures.  It seems as though he's actually increasing his fuel capacity.  Ooops, there goes that Nobel Peace Prize.  Maybe I should start calling him the Chief Dupe in the White House.  Oh, and I also heard some DJ managed to get through phone security and talked to the Dupe on Air Force One.  So, how many ways can you spell the word stupid starting with the letter "T?"
Finally, Mother Nature has decided to gift us with a bit of heat over this holiday.  Today the temp is supposed to hit 96 F.  Tomorrow we might crack the century mark.  I mean, they're only forecasting 99 F, but let's be serious here, that's pretty damn toasty.  That's another reason while I'll get my ride in during the early morning hours - heat stroke is not pretty.  Of course, I suspect that every day the Idiot Dupe in the White House comes close to stroking out. 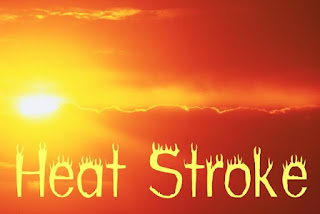 First Kim gives him the shitty handshake,  and in about 9 days Vlad's waggle a snarky finger at him as he laughs at this First Class Bonehead behind his back.