Sunday, and some of you are sleeping in.  Not me.  I got a 6.25 mile ride in.  I'm happy with that since my last ride was 13 days ago.  One thing I'm going to start is Training Sessions rather than ride.  Even though you may want to think that has something to do with our pixie from Hell Attorney General, it has more to do with building leg strength.  Tomorrow will be my first shot.  I've chosen a 30 minutes workout.  We shall see how it goes.
Outside we have overcast skies - showers and possible thunderstorms are on the way.  The high temp is supposed to top off at around 66 F.  Now ain't that ducky?
My vacation is now 8 days away.  I can not wait.
Oh, and we are now in hurricane season.  True most of the whopper storms don't get here until the fall, but we've already had Albert... or was it Alberto?  Don't quite remember.  Evidently everything that has sustained winds of over 39 mph is being named.  I suspect the weather pattern we are in now might be an bi-product of Albert... or Alberto.  We're supposed to be getting stronger storms this year... global warming, you know?  That thing Conservatives desperately want to deny.  I mean, portions of the coastline becoming uninhabitable?  Preposterous.
Sad to see that "Solo" is slowly failing tat the box office.  This is a painful lesson for Disney.  There is not an unquenchable appetite for all things Star Wars.  From what I've read, however, this film had problems from the start.  Two directors that weren't meeting expectations were fired and Ron Howard was brought in..... Ron Howard.  Now, I like some of his films.  "A Beautiful Mind" was very, very good.  However, when I think of possible directors for high paced, science fiction, adventure films his name does not dance gracefully to the tip of my tongue.  And Alden Ehrenreich, who was good in "Hail Caesar," was apparently miscast.  Not every actor is an action / adventure hero.  That's a shame. 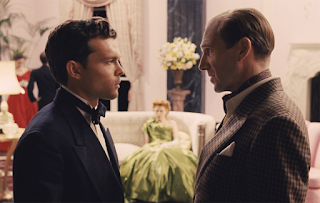 Still, I'm fairly certain I'll go see it either Wednesday or Thursday evening.
Posted by Dave R at 8:48 AM