Well, yesterday was disappointing as hell, wasn't it?  Chief Justice Kennedy's announcement was quite the stunner.  Not that it came as a total surprise, there have been rumors for quite some time.  Still, the idea of the Supreme Court losing it's 'swing voter' is more than a little disheartening.  Of course, the Republicans are going to try to rush through a nominee before the Mid-Terms.  You can bet they're going to be pushing a man in his forties who has no problem shitting on women's rights. They want another Neil Gorsuch who will give Conservatives what ever they want.  This is how they say "fuck you" to the majority of people in this country.  For all you voters who sat home in 2016, those of you who thought your vote didn't matter, or who believed Hillary had it in the bag - this is your payday.  This is what your apathy is depositing into your account.  Same sex marriage?  You know they're going to go after that, chipping that right to bits and pieces.  If you didn't vote and are beginning to get worried - good, this is the price you pay for staying home.
And is if that wasn't disappointing enough, I went to see "Jurassic World, Fallen Kingdom" last evening.  I'd watched a video in which some guy said he thought the whole movie was sad.  He was wrong.  This latest installment isn't said, it's cynical as hell.  I'm suspecting this might be the middle part of a trilogy which will end on a brighter note.  But, even if that's the case, there were some serious problems, like predictability, and lack of originality.  There's a dumbwaiter scene lifted straight from the script of Jurassic Park.  Right from the beginning there are problems.  A volcanic eruption is threatening to destroy all life on the island.  Spoiler alert.  At the height of the eruption, an aerial shot proves the island is much, much bigger than the eruption, that you'd actually need some sort of Krakatoa event to destroy all life.  About 20 minutes in, you realize the writers decided to cobble most of the script from a discarded draft of Jurassic Park 2.  Chris Pratt was fine, but not as funny.  He evidently realized the best parts of this film, were the clips they used that were supposed to be from the first Jurassic World. 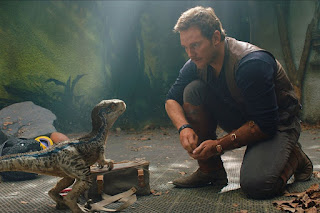 As I said, this movie wasn't as sad as much as it was cynical.  Of course, we're all going to become a lot more cynical when the new, conservative justice takes his seat at the Supreme Court.