This is my Friday!!!
Still waiting for Blogger to fix their email issue.  As it is, I no longer get a notification when someone leaves a comment.  The only way I see comments is to actually go into the blog, which means my response time might be a little slow.
And... of course, everybody is shrieking about the Supreme Court decision yesterday siding with the Colorado baker who refused to back a cake for a gay couple.  This was a terrible decision, however if you look at what was said, especially by those challenging the baker, you can understand why this decision was reached.  The attorneys representing the gay couple, and their rights, did not specifically go after the baker and his cherry picked beliefs, they went after religion.  Even though they used personal pronouns, their specific attacks were not about his bias, or his discrimination, but rather the religion he used to justify his refusal.  This baker has a history of not baking wedding cakes for gay couples.  This was not the first time he has done this.  That should have been their focal point, not religion.  They failed to prove that he, himself was the problem.  Seven justices voted against them.  That's a lot.  Gay rights took a step backwards because they chose to go after his 'freedom of religion' rather than his prejudice.  The baker alone was the problem and they needed to prove this... and didn't.  Fools.
Anyway, the weather outside is very nice.  I'm almost tempted to take a personal day, but I work instead.
I did a Cyclops 30 minute workout this AM - Holy Shit.  My legs are all gummy.  I rode 8.32 miles.  I had to laugh.  I was riding along with Tyler Stein, listening to music in my earbuds, when I realized he was actually talking to you about the ride.  Of course I couldn't hear what he was saying. 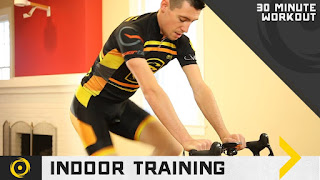 Here's a fun fact.  From what I saw, Tyler and I sweat about the same amount during a ride.
Posted by Dave R at 9:01 AM