Well, here it is Tuesday and I'm off work.  Nope, no cold, no sniffles, this is, however, the last week of the fiscal year and they're cutting hours.  When they asked... I accepted.  Tomorrow I'll put in for 8 hours vacation pay since I budgeted for 40 hours this week.
Now I know there are Liberals out there who think that Schumer blinked in order to keep the government open for another 14 days... he didn't.  What he did do was get a "promise" from old Mitch McTurtle regarding immigration.  This means that in what?... 2 weeks?  the government is going to shut down again.  This also means that when it does the word 'liar' is going to start falling from Democratic lips.  You see, Mitchie also lied to Susan Collins, that Centrist Senator from Maine about immigration.  No one lies as much as a Republican.
And for those of you who don't know, the Pennsylvania Supreme Court hand the state Republicans a healthy plate of truth yesterday when the Court ruled that their gerrymandering was unconstitutional.  What makes this so sweet is that in Pennsylvania Supreme Court Justices are elected by the people, not appointed, and the Democrats have a majority: 5 - 2.  Of course the Republicans are running around like their hair is on fire, shrieking about how they're going to take this to the US Supreme Court.  They have a problem, however.  You see the ruling cites the State constitution, not the Federal Constitution and the US Supreme Court doesn't usually hear cases regarding State Constitutionality.  Oops.  To give you an idea how badly the Republicans have shit on the American Right to Fair Representation, take a look at this district. 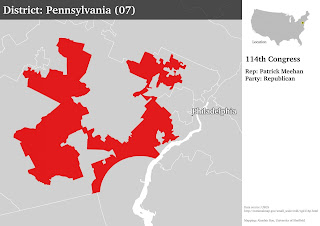 What makes this even more pathetic is that this district is represented by Patrick Meehan.  You know who that is, the Senator who was just kicked off the Ethics Committee for hitting on a younger aide and then using office funds to pay her off.
Now the districts have to be redrawn before the March 18 primaries.  Republicans all over the state have been rolling around in apoplexy.  They are freaking furious that someone might actually want to put the Voters First in Pennsylvania.  As John Gray says "hey ho."
Anyway, it's time for me to hit the free weights.  If you listen carefully, you can hear the 25 lb dumbbells calling out my name.