Yesterday was one of those odd days.  The eye appointment was aggravating; driving twenty minutes, arriving on time at 0715, and then being told "oh, we changed your appointment" was not a good thing.  But then something good did happen later.  I went to transfer money from my savings to my checking account so I could pay my car insurance and Wow I discovered a big deposit had been made.  Holy Shit!  I got my Income Tax refund already.  Because I had the paperwork, I filed electronically 2 weeks ago, and that paid off.  I guess nobody else in the country files their taxes that early.  Anyway, since I had that chunk of change in my account, I paid the insurance and then drove down to the Enola K-Mart (which is closing) and bought towels and plaid boxers.  There, in case you were wondering, now you know, it's boxes over briefs.  They are next best thing to letting the wild beast run free.  And almost as good as letting the wild beast run free, is dressing him up in plaid. 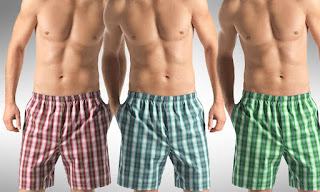 Let me tell you, there's nothing better than a nice warm Tartan.
I did my cardio to the new Fall Out Boy album this AM - Mania.  There's only one song that I suspect will have to grow on me, the rest of the music is good.  The only problem I had was this was the first time I listened to it in its entirety which meant I was focusing on the music and not my legs - as a result I only managed to get in 2.1 miles.
Oh, and I saw that the House of Fools run by that minority hate group, the Republicans, has voted to release a sensitive document, a memo written by one of their own, which they claim will show bias in the DOJ.  For this document to have any value the writer would have needed to be an individual above reproach by both parties.  Evidently the Democrats have their own memo, but that minority hate group, the Republicans, voted to repress that document.  Basically what they're doing is releasing something one of their own wrote, using suppositions he cherry picked, to prove the other side is bad.  Think of it as a trial in which only the defendant and his crooked lawyers speak, the prosecution has been locked out of the courtroom.  The only ones who will believe this is their base... and Faux News.
Tonight the Idiot Jerk in the White House get to speak on National TV - like so many of you out there I will not be watching.  Instead I will most likely be playing a video game.  I'm sure I'll have much more fun playing Fallout New Vegas, feeling all warm, and cuddly, and plaid, than I would vomiting.