The Fire, The Fury, The Apples

Well, it's a cold, cold day here in Central PA - wind chills expected to go as low as -30 (F), of course that doesn't mean the wind is going to be blowing all the time, it's not.  In fact, it's so cold I'm beginning to believe that down in Washington hell just might be on the verge freezing over, well, at least for the Republican Party and the Idiot Jerk in the White House.  "Fire and Fury" goes on sale today and the Cyclone Bomb it's bringing are freezing the very blood in the Idiot Jerk's veins - you see, evidently there's enough evidence within those chilling pages to define him as a buffoon... at best.  'Childish' I believe is one of the adjectives used to describe him, and that sounds about right.  I'm torn between whether I should buy this book, or pass on it because I might find it the funniest read I have in a while, but it also might be scarier than the scariest Stephen King.
Oh, and I see Appleheads are putting on their 'woe is me' masks.  Bad chips, you know?  Seems like Intel must have left them in the deep fryer too long and now every Apple product out there can be hacked...  Ooops.  But then my relationship with Apple could best be described as "meh."  I'm too diverse an individual to tattoo myself with one brand name.  There's a Sony smart TV downstairs and Samsung smart TV upstairs, I play games on an Xbox one... and a PC, I do a lot of my writing on a Surface tablet, and the PC I do use is an amalgamation of parts, assembled for me by Cyber Power.  My first smart phone was actually a Garmin Asus, which weighed about 8 ounces.  I've never been one of those people who jump on board the 'trendy train,' who buy something simply because everybody else is buying that product.  There are a lot of people out there who just don't understand that Apple is successful simply because they've managed to turn a large number of people into sheep. 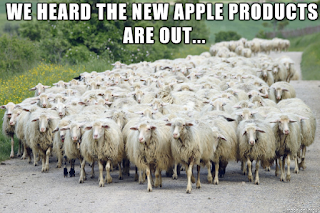 So, I'm off today, though I'm still planning on going to my neighborhood Giant to pick up some yogurt and dog food.  Otherwise it will be a day of naps, laundry, and bike riding (inside of course).