Well, here it Saturday and I get to go to work.  I'll be off for the next 3 days so I supposed I'll be able to endure.
Yesterday I went down to the Lebanon VA for a consultation.  I have been pressured for years to have a colonoscopy performed.  Well, now one is scheduled for... (are you ready for this?) Valentine's Day.  On that most romantic of days something alien is going to be inserted....  Let me tell you, my amazing ass is more sacred than any Indian Burial Grounds - nothing goes near it without my approval.  Now I know there are people who say this is a necessary evil, however if you start looking at the ratios of people who have the procedure performed vs the number of precancerous polyps discovered those numbers are staggeringly low, like 1.6%.  I'm not saying it isn't a worthwhile procedure for certain people, if you have a family history of colo-rectal cancer, or cancer in general, or there are some other health reasons, but for the vast majority it is unnecessary.  Someone, somewhere is making a lot of money.
Another thing I did yesterday was to work on cleaning out the attic.  I brought down a box of old VHS video tapes which are now waiting to go out into the trash. 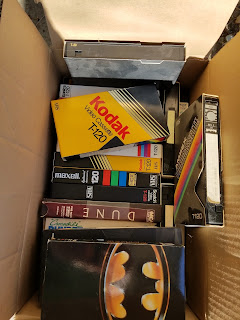 I no longer have a VHS player.  As I looked through the titles I nodded to myself, remembering how much I had enjoyed certain films, and how many times I'd watched several.  I also realized there was no way I would want to watch these things again.  I would rather throw them out instead of someone else,  In fact, at some point, after the dogs are gone, I will sell the house and for that to happen the attic will need to be clear.
There was some amusing news regarding our economy yesterday.  We imported much more than we exported, in fact, the last time the country imported this much stuff was 2008.  Because American workers make much more than foreign workers, our American products are more expensive, and those who run around shrieking "buy American" don't want to spend the dollars.  They'd rather cheap it out and buy something similar made in China, or Thailand, or Mexico.
Posted by Dave R at 8:30 AM