Waiting for the Third Strike

Well, here it is, Friday, the first of my two consecutive days off... and boy is it cold outside!  According to Accuweather, the current outside temperature is 12 (F) or -11 (C).  No matter which temperature scale you use - it's frigid!  And, of course, the Idiot Jerk in the White House snidely Tweeted something about Global Warming.  I'd say he's an old fool but since I already know he's an Idiot Jerk that would be rather redundant, wouldn't it?  Won't it be interesting to see how his heirs deal with Mar-a-Lago going under faster than the Titanic on a really, really bad night. 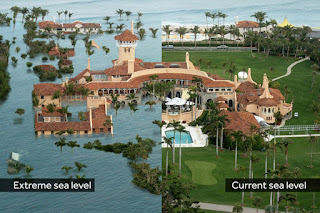 I have no doubt that the vast majority of his supporters totally agree with him, but that's the kind of consensus you get from one dimensional thinkers.
Since Social Conservative's theology prevents them from acknowledging even the possibility of Global Warming, especially in that man might himself be a factor, they are right there with him.  They don't understand that Karma, or Judgment, or what ever you want to call it is coming for them.  And it's not like they haven't been warned, you know?  Remember Joel Osteen and his total lack of compassion, his total disregard for humanity in the wake of a storm of Biblical proportions?  Not one of these Social Conservatives took a stand and publicly called him out.  Well, that was strike one.  And all of those white Social Conservatives celebrating and supporting Roy Moore and his total contempt for humanity?  That was strike two.  You can believe me, the Universal Pitcher is winding up, preparing to throw another fast ball right in front of their noses.  They might hit it out of the park... nah, we already know that's not going to happen.  It's not in their self-centered, self-appointed superior nature.  Right now, all we're waiting for is that final, third strike.
Posted by Dave R at 8:51 AM