Well, it's Friday, and while many will post silly memes on Facebook about the end of their work week, as do millions and millions of other people, I get to work tomorrow.
How sad that Al's leaving.  One of our brightest, truest voices is throwing himself on his sword... well, kind of, since he did initiate some unwanted touchy, feely moments with women.  There is a price to pay, and he's paying it with dignity.  By doing so he is illuminating the phony Family Values of the Republicans, the Pussy Grabber, the Child  Predator, that moron Trent Frank from Arizona who wanted women from his office to be surrogate mothers since his wife has fertility issues... at least he says that it's his wife.  Hasn't Trent Frank ever heard of adoption?  Wait, that's right, he's a Family Value Republican so any children would need to come from his gene pool, right?  Dumb shit.  Anyway, Al's leaving office and my money says he's going to torch as many of those phony Family Values asswipes as possible.
I did 35 minutes on the elliptical this AM and felt great.  I'd post the results but there was a Garmin update to my phone and now I've got to re-establish the Bluetooth connection between it and my Fenix 3 HR.  Also, while I was waiting for my surgery, I purchased a Suunto Spartan Sports Watch, which is similar to the Fenix, except the stats it provides tend to be more detailed in a couple of areas.  The only problem I'm having with it is the location.  Even though I've set the thing up for Enola, PA, it seems to want to locate me in the 17th Arrondisement (Paris suburb), which would be nice if I wanted people to think I was working out in France.
And then there's Biggie.  Lily and he were chasing each other around downstairs with a purple squirrel, squeaking it at each other, and teasing each other with it's tail, for a long time this AM.  While she went to take a quick nap, I found him sitting in the computer, training, workout room. 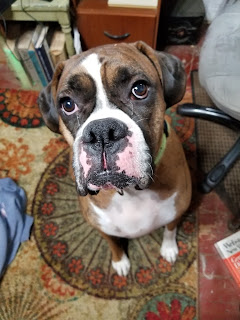 ]
Handsome dog, isn't he?  That's my gray computer chair to his left which will give you an indicator of just how big he is.