Well, here it is Sunday, I hope everybody is having an exciting weekend so far.  Yesterday, being the first Saturday in December, was our Kid's Workshop at the store: 331 kids.  Have you any idea how much noise that many kids put out?  Little hammers hitting little nails!  And just 75 feet away!
The Idiot Jerk in the White House farted out some sort of nonsense yesterday... like, maybe Flynn was fired for lying to the FBI... which doesn't jive with what he said, way back then.  Of course, that doesn't matter for his supporters since they all suffer from long term memory loss, which means anything longer than two weeks ago has already been forgotten.  Besides, they could care less since they're all going to get a big tax cut!  They know the big bucks are soon going to start flowing into their bank accounts!  Their taxes will drop dramatically!  Why they know it'll be like paying nothing at all!  Right.  Because Corporations are going to use their tax cut to create more new jobs!  Right.  Even Breitbart knows this is bullshit.  Of course, because the article is so technical and doesn't fountain right wing hatred, most readers will never get past the 2nd paragraph.  Trickle down economics has always failed.  Reaganomics totally fell apart and George H. Bush had to raise corporate taxes and it will happen again now.
As for the Idiot Jerk in the White House?  Like a bad Tarot reading, his cards keep getting flipped over revealing the ugly truth - lies, deceits, cover-ups - we're just waiting for the Hanging Man.  Everybody pretty much knows that the Idiot Jerk was giving orders to Kushner who was giving orders to Flynn.  The Idiot Jerk is a business man, who makes business decisions that are not based on his loyalty to his country, but rather to himself.  He alone decides what's a good decision, and he has no problem in lying because his self loyalty allows him to believe his own lies.  As a businessman he knows what's happening is bad, so he lies, and he talks about how great the stock market's doing.  Looking at his past, he has had no problem in declaring bankruptcy, in fact he's done it what?  Four times?  He's made that business decision and then walked away with no regrets.  It's water over the dam.  You can bet's he and his spawn already have a contingency plan in place for when Mueller turns over the Hanging Man. 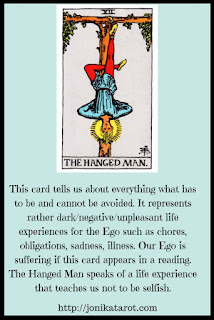 He will make a business decision and move on... most likely to Europe.  I wouldn't be surprised if there was a really nice Dachau waiting for him in the outskirts of Moscow, from which he can hobnob with the Oligarchs and brag about how many trademarks he and Ivanka scored in China.