Okay, so it's Tuesday and I get to go back to work... for 3 days.  Today will be hectic at the Returns Desk as unwanted or unneeded gifts get returned.  People will show up by the droves to check out the marked down Christmas decorations... and expect us to mark them down even more.  And those gift cards people got?  Instead of holding on to it until Memorial Day when there will be another big sale, they're going to rush in and spend it on a tool being sold at full price.  Their loss.
Oh, and I saw where the Idiot Jerk in White House was taking full credit for people saying Merry Christmas l- what an asshole.  What is even more pathetic is that there a hordes of clueless supporters who don't realize just how much he lies.  I'm waiting for him to say that if he'd been in charge of Creation, he'd have finished it in 5 days... and everybody would have really, really nice orange skin.
My sister and I picked up my Mom yesterday and took her to my sister's for Christmas Dinner - and later my Mom called my sister to tell her how all her grand kids had been to visit... and to ask her if she'd had Christmas Dinner at my sisters....  What's even funnier (and we do think it's funny) is that my sister had called my Mom to remind her about Christmas Dinner and we got there... that's right, she was sitting at her table in the dining room... eating.
Now I don't know about you, but I got a really, really big laugh when I saw that someone had sent Steve Mnuchin a box of shit for Christmas.  I'd have laughed even harder if I'd heard that his bimbo of a trophy wife had opened it up and said, "oh, look Stevie, someone sent us a big box of fudge!"
Of course, the dire predictions are beginning for the 2018 elections - especially for the Republicans who are starting to realize that their great tax overhaul and job creation is not going to win them any support from middle class voters.  I guess we should begin to see this great tax cut starting in February.  I don't think I need to tell you that his supporters are expecting much more than a $10 a week increase in their paychecks.  They're expecting big bucks.
And out of all the toys the dogs got for Christmas, Big Seig's favorite is.... the brown beaver. 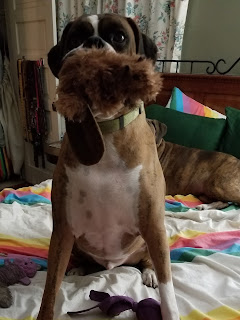 He walks around with it drooping from his mouth.  Jeez, I thought I'd raised him better than that.
Posted by Dave R at 9:26 AM