Yesterday was rather busy here:  a couple of loads of laundry, raking leaves in the back yard, a visit to my Mom thrown in with a couple of short naps with the dogs (they love that).
For those who didn't see, Russia was banned from the 2018 Winter Olympics basically because without drug enhancement, their athletes are average, and let's face it, average doesn't win Gold Medals.  I suspect this might upset some of the Idiot Jerk supporters because... this is just one more indication that Putinland is corrupt and evil - cheat, he loves it when they win by cheating.
And in Washington?  Well, we're looking at a government shut-down on Saturday.  There are no Democratic, or Independent votes offering to help the Idiot Jerk and his supplicants.  If you look back, I believe I said this was one of the reasons Chuck and Nancy jumped on board his request for a delay.  Oops.  We're about to see the 'art of the deal' fail... big time.
But the really big news was that Deutsche Bank is going to turn over the Idiot Jerk's financial records to Mueller and his Team.  I'll be honest, I was surprised to discover that when it comes to getting a loan, the Idiot Jerk doesn't go American, he goes German..  In fact it turns out he owes a fortune to Deutsche Bank. 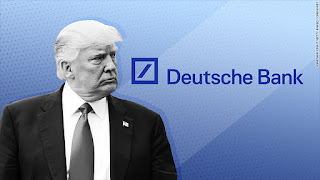 My money says that news gave him the hot runs.  Not only does he love this bank, evidently so do all of his spawn (Kushner has what? a $200 million + loan from them).  For a Forensic Accounting this must be a ticket to the Promised Land.  This is how they got Manafort - looking at his finances.  People who were upset when he refused to release his Income Tax Returns will find these figures much, much more satisfying.  His Net Worth will probably drop... maybe dramatically, when his total debt is released... and you know it'll be released, or leaked.  Is this going to hurt the Idiot Jerk?  You can bank on it.