Well, here it is Tuesday morning... and I'm starving.  Blood work for my yearly physical happens at 0715... and I get up around 0500, and have usually eaten by this wee hour of the morning.  Friday I go for the results... yippee.  Usually they're good, this time however?  Six days from Christmas I've been chowing down on the cookies and candies hard.  I'm a carb addict, you know?  I'll do just about anything for a Sand Tart... anything... and don't even think of waving a Snickerdoodle within five feet of my mouth, you're liable to lose a finger or two.
And I picked up the new bike yesterday.  Beautiful.  That's what they were saying at World Cup Ski and Cycle.  The color:  Oxblood.  Red.  My most favoritest color in the whole world.  I took a boatload of pictures, too... here's one.  For those who don't know, it's a Cannondale Synapse Carbon Disc Ultegra...  mouthful, ain't it, which means it's carbon fiber, has disc brakes (super) and is Ultegra (which is their way of saying Superior... or great... or top of the line). 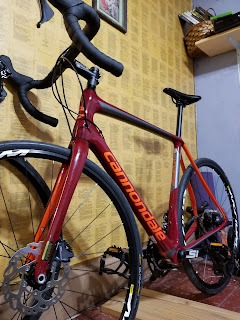 So, why did Bob Corker (R) decide to vote 'yes' on the Republican Tax Overhaul?  Wouldn't have anything to do with Orin Hatch (R)  adding a provision that benefits Bob Corker, would it?  Well... maybe....  I mean, he's already said he's not going to be running for re-election so why not give him a nice going away present?  The phoniness of Republicans always amazes me... and their base... well, all they need to hear is tax cut and you've got their vote, even if it's for someone else, someone richer, someone less deserving.  A tax cut is a tax cut, after all, isn't it?