Yesterday was a busy day.  I made my burritos - in fact I made way too much.  Sometime this afternoon I'll throw all of the leftovers into a big pot and make burrito chili.
And I put out my Christmas Nuts. 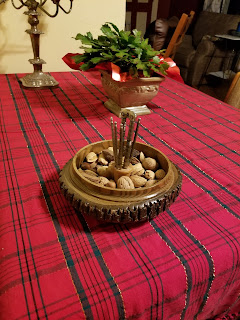 Nuts are a regular part of my diet, in fact, I eat them daily since each and every nut is filled with protein.  Yummy!
And yesterday was also the day I finally got fed up with my Kinetic Trainer - you know you really hate it when you spend a lot of money on something and it turns out to be a piece of shit.  The reviews, for the most part, were very good and so I ignored the few complaints...  bad decision.  The problems started shortly after I opened the box.  There were calibration issues, getting the sensor module to size my wheel at a speed of 21 mph (never happened), also the sensor module itself needed to be replaced because the Bluetooth wouldn't connect with the app.  Yesterday the app started crashing about 4 seconds after I started it on both my phone and tablet which means there's something wrong with the app (buggy as hell, if you ask me).  I shot off an email to Kinetic... a couple of hours later I received a general notification, not from a Kinetic, but from another customer who was complaining that the app had stopped working for him as well.  This is bad thing.  The app works this AM, however it's too late, I've already ordered a CycleOps Magnus.  I've used CycleOps for years so I'm going back to them.
And for those who live somewhere other than Pennsylvania, one of three court cases begins today challenging those evil Republicans and their gerrymandering.  They and their minority party did the same thing in Wisconsin and got a big smack back.  Hopefully it's going to happen again in this state.  You would think they would realize the easiest way to stay in power is to get the majority of the voters on their side.  If they want to keep catering to minority hate groups they deserve to be stomped into the ground.
Anyway, what do you think of my nut bowl?  Made from a tree!  Personally, I think it's a little too small... my nuts just seem to overflow, which is not a good thing, and every time I turn around it seems to be empty.  Damn.
Posted by Dave R at 7:13 AM