The Greatest Christmas Present Ever

Well, here it is Sunday morning - tomorrow's Monday and some of you have to go back to work... now ain't that a bitch.  I have off.  Not only do I have off tomorrow, I work one day and then have another day off... which is almost sweet.
So far today, besides playing fetch with the dogs, I've set up my new CycleOps trainer and, using an Ant + stick have connected it to my Samsung laptop.  I'd bought the laptop when the arthritis in my lumbar region (last 5 vertebrae) had paralyzed my right leg and I wanted a fast, portable gaming computer.  It's shit.  It looks, good, got great reviews, but the keys pop off... and it's slow.  With 2 hard drives it runs slow as frozen piss.
And the rumor out there is that the Idiot Jerk in the White House is going to fire Mueller after the Republican Congress passes their horse shit Tax Overhaul.  The minority base supporting the Idiot Jerk will be happy as pigs in shit... however, a majority of Americans will be not only very unhappy, but very angry.  Does that minority group come even close to comprehending this?  Absolutely not.  Do they understand that the great majority will lift up their very large majority feet and begin to stomp them into the ground?  Absolutely not.  You see, no matter what that Fat Pig in the White, or the party itself, says this is about total control.  That's right.  For them 'making America great' means having total control - nothing else.  The truth, however, is that America will only be great after this minority group is voted out of office.  For America to be great this minority group needs to lose any vestige of control... forever.  Their end is approaching.  Roy Moore's loss, in spite of all the white, social conservative money flushed down the toilet was a neon road sign for them, which is why they're doubling down.  The Tsunami is growing to a towering height and instead of running for higher ground, hoping to somehow survive, they're digging in, trying to strengthen the foundations they are building on the sand.  It's about total control... no matter what.
The truth they totally refuse to see is that by firing Mueller, the Idiot Jerk in the White House would be giving the growing Majority of Americans the Greatest Christmas Present ever, but then most losers are always blind.
Anyway, I had been thinking about putting up a tree this year... but probably will not because of the dogs. 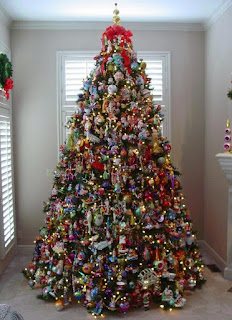 You see I was talking to a woman at work who put up a tree, and she has 2 dogs, both smaller than mine, and the one named Otis grabbed hold of the lights... and ran.  Chaos and Catastrophe.  Me?  I told her that I'd be more concerned with coming home and finding branches... all over the house.