So I had my appointment with my (notice I'm saying 'my') Ophthalmologist very early yesterday morning; they were going to dilate my eyes to see what was causing the severe blurriness and pain.  Dr. Kilmore is a man in his sixties who's desperately trying to look like his... oh... early thirty something and it isn't working.  Anyway, Kilmore Eye Associates has good reputation even if the good doctor feels he needs to look like a faux blonde.
Anyway, there was no dilation.  Two different associates looked at my eyes before I was ushered back to the good doctor's office where he, himself, examined me.  After a few minutes him using different instruments to look at, probe and prod he asked "does Glaucoma run in your family?"  My response was "nope."  Turns out I have what's called Closed-Angle Glaucoma."  Yippee.  The first thought that went through my head was "oh, shit, I'm going to have to start smoking pot... at my age."  Wrong.  Besides, I'm sure that would raise havoc with my game playing.  Simplified, the fluid in my iris is draining way too slow and pressure is building up which is causing my symptoms.  Hhmmm. 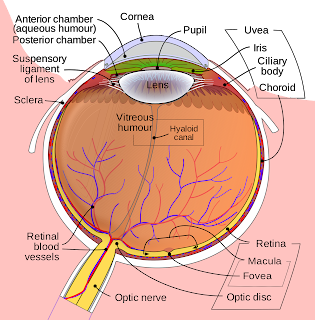 Tomorrow morning I'm going to return to the good doctor's office where he will perform a Laser Iridotomy.  Now, doesn't that sound simple?  It does.  The first person I told said "oh," sounding very nondescript, so I've added a little flash to the procedure.  Now I'm telling people they are going to fire lasers into my eye, burning away tissue, and punching a hole through the iris.  Doesn't that sound more exciting?  The entire searing process takes about... a minute and a half.  I can remember when being diagnosed with Glaucoma meant you were gong to go blind.  Now it's a quick fix.