I see how Lauer fails.

Well, they shot those fiery lasers into my right eye yesterday... ho... hum.  Not so bad.  The laser gun made noise, loud noise, bang, bang, bang.  All I could see was the aiming laser, which was red, I like red.  The entire procedure took about... a minute and a half.  There was some discomfort, but nothing excruciating, in fact the discomfort was rather mild.  The only problem I had was with the waiting... holy crap.  I got there early and learned they were running behind: a half hour before they took me back to check my eye pressure.  After that was done, they used several eye drops to numb my eye and shrink the size of my pupil.  And then I had another half an hour wait... until they moved me to a smaller waiting room closer to the laser, where I sat and waited.  When the doctor had finally holstered his laser, I was sent to wait again, for an hour.  I left home at 1010 and got home at 1400.  I hate waiting.  I'm one of those 'snap your fingers' and get it done it done people. 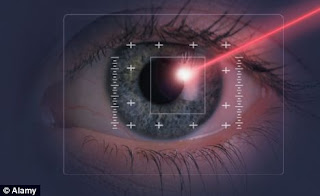 Supposedly there's a little hole in my iris... I can't see it.  I looked last night.  Had my magnifying glass, you know?  Nothing.  As long as it works, I don't care.
I did read that everybody is jumping all over Matt Lauer for being a candy ass in his Trump Q & A.  Lauer's okay as long as his questions are written down.  His mind is not 'quick like a bunny' when he needs to suddenly delve, or pry, or query.  He is a safe moderator.  His best tactical questions seem to happen when he's chatting up some celebrity, not trying to show that he's politically astute.  He was not there to challenge the veracity of either Trump or Clinton.  His sole purpose was to ask questions.  Of course, a four year old could have done the same thing.... except a four year could have used the 'age' excuse.
Posted by Dave R at 6:16 AM